On 19th August new entry regulations were introduced in Iceland. Travellers are not only obligated to do two COVID-19 tests, but also a 5-day quarantine between them. This is a significant difficulty, but some people – including me and my friends – decided to travel to Iceland anyways.

When I posted a text about my experiences with the new regulations in Iceland, I got several messages with the same question: what if the test is positive? COVID.is and other Icelandic sources don’t say much about the procedures, so I replied that unfortunately, I don’t know.

In the meantime, however, I got some first-hand information. A friend who arrived in Iceland a few days after me with her parents and her partner was tested positive for COVID and done the isolation in Iceland. What are the procedures in such a case and what to expect? Here is her direct report based on the experiences from the past two weeks.

On the 5th day of the quarantine, we drove to Reykjavik for the second COVID-19 test. It happened on Sunday when tests can only be done in the capital. We had a house about 70 km away from Reykjavik, near Selfoss, where we could do the test on Monday. Finally, we chose to do the test as soon as possible in Reykjavik and continue the trip.

After less than 5 hours, I looked horrified at my phone which displayed an Icelandic number. I picked up completely stressed, expecting the worst … Unfortunately, my gut feeling was right – my COVID test was positive. The lady who called me asked where I was and immediately arranged a doctor’s appointment in Selfoss. She told me to go to the hospital immediately. They took a sample from my nose, throat and blood.

Over the next few hours both, my partner and my dad got a text message saying that their result was negative. My mom, on the other hand, didn’t get a message at all. Not everyone gets it and if you don’t receive an SMS within 24 hours, you can assume that the result is negative. To be sure, I wrote an email to them.

The next day (Monday) I called the hospital to find out what the results of my tests were. It took quite a long time to get them. It was already evening when I got the message that the result was again positive and that there are no antibodies in my blood. As a result, I received the information that I will need to stay in insolation for two weeks. Isolation in Iceland is more strict than quarantine and you can’t leave your place of accommodation. Moreover, after a week I was also supposed to do another test.

What happened with the people that came to Iceland with me?

In the beginning, a lady told me only to keep my distance from my parents and partner. I shouldn’t also sleep in one room with them and I should clean up everything in the bathroom after using it.

On Monday, I was informed that my parents and my partner have two options. Either they can return to Poland the next day in the morning (asap) or they have to do the isolation with me.

Fortunately, before the new regulations came into force we were supposed to return on Tuesday anyway. So they took advantage of the flights that we already bought and returned to Poland. The flight was in the evening, not in the morning, but in the end, it didn’t matter.

Accommodation during the isolation in Iceland

I also had two options. I could stay in the previously booked cottage near Selfoss, but then I would have to pay for the entire stay myself. Or go to a hotel in Reykjavik at Iceland’s expense (including food).

Before making the decision, I contacted my insurance company. It turned out they could cover accommodation’s costs up to EUR 100 per day, but this didn’t include food. We considered this option for a short time because it would enable my partner to keep me company without additional costs. However, I was afraid that if for some reason they would take me to the hospital, my insurance company would stop covering the costs. Due to the high risk and additional costs for the car and food, I decided to stay in a hotel in Reykjavik by myself. 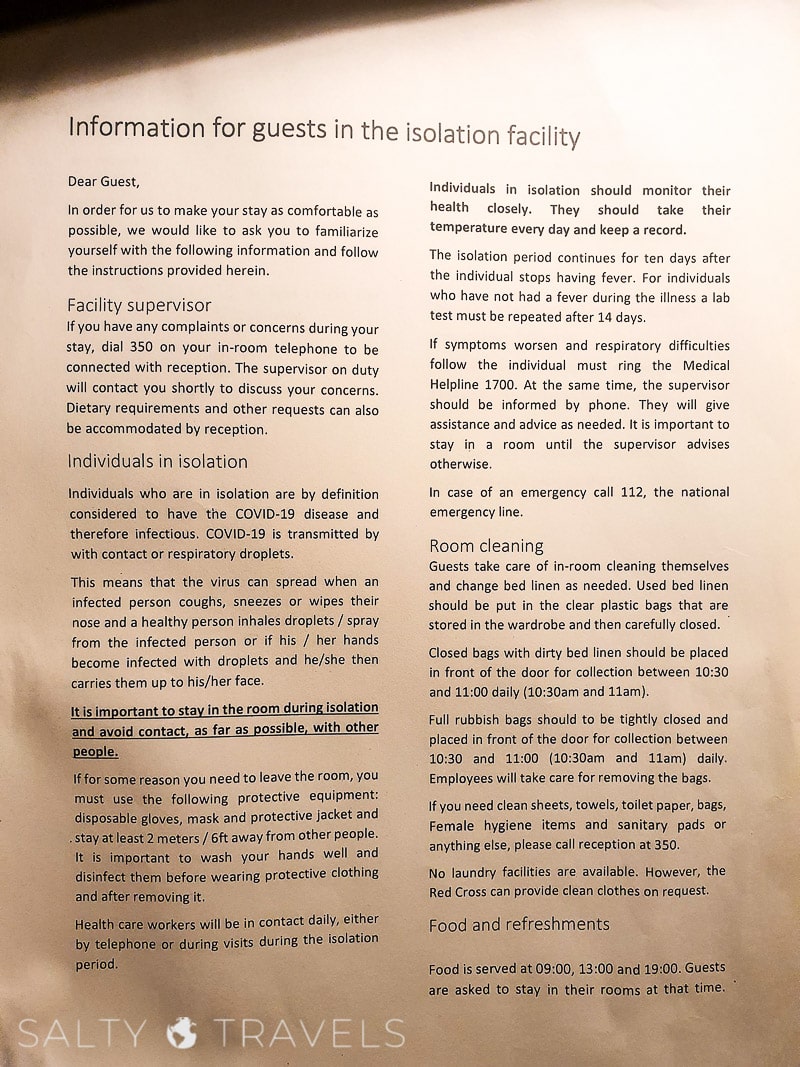 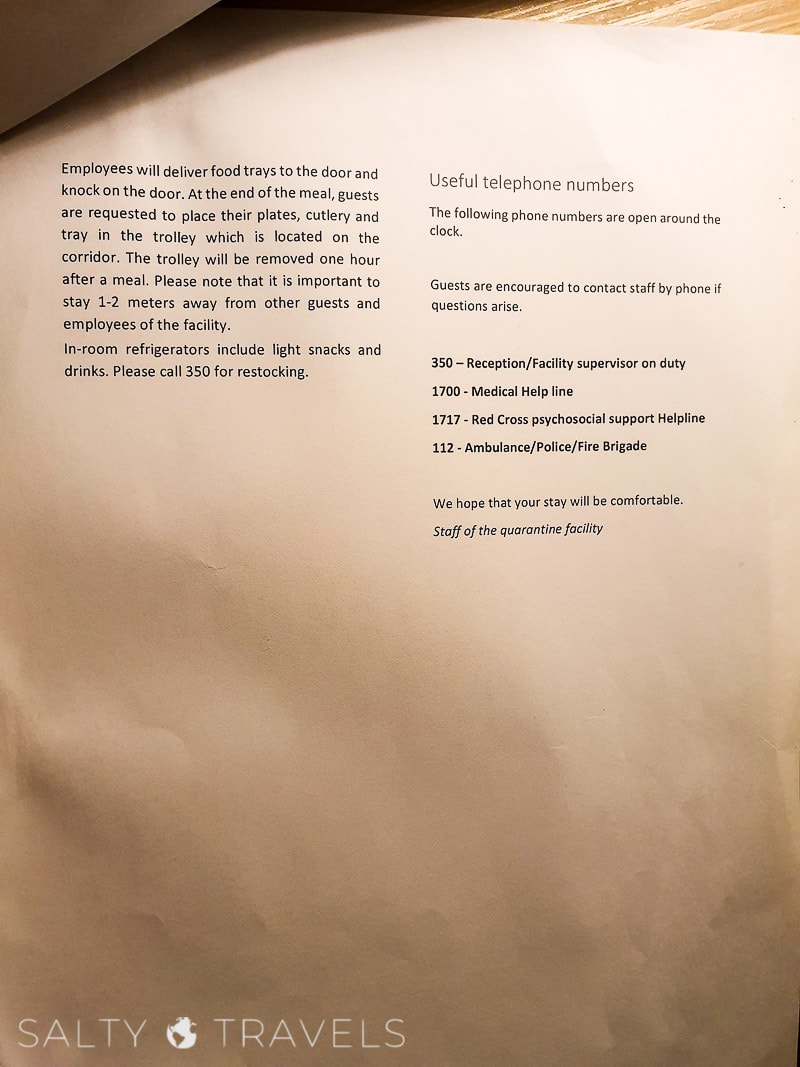 I arrived at the hotel on Monday in the afternoon. My partner brought me there in a rented car. Earlier, I was asked over the phone if I have the possibility to get there. In case I wouldn’t, they would most probably organize some kind of transportation for me.

Finally, my isolation began and I was sitting in a small hotel room for a week. In the room, there was a TV, a fridge and a kettle. The windows could only be slightly ajar so I was missing the fresh air a lot. The entire hotel was prepared for people with positive COVID-19 results. During my isolation, there were only about 15 people, but earlier there were even 75.

I am lucky that I had no COVID-19 symptoms at all. However, I managed to exchange a few words with the staff and they said that some of the people staying there were feeling really bad. In the beginning, I also had a few talks about how I feel. Since I always said I had zero symptoms, they stopped calling me over time. 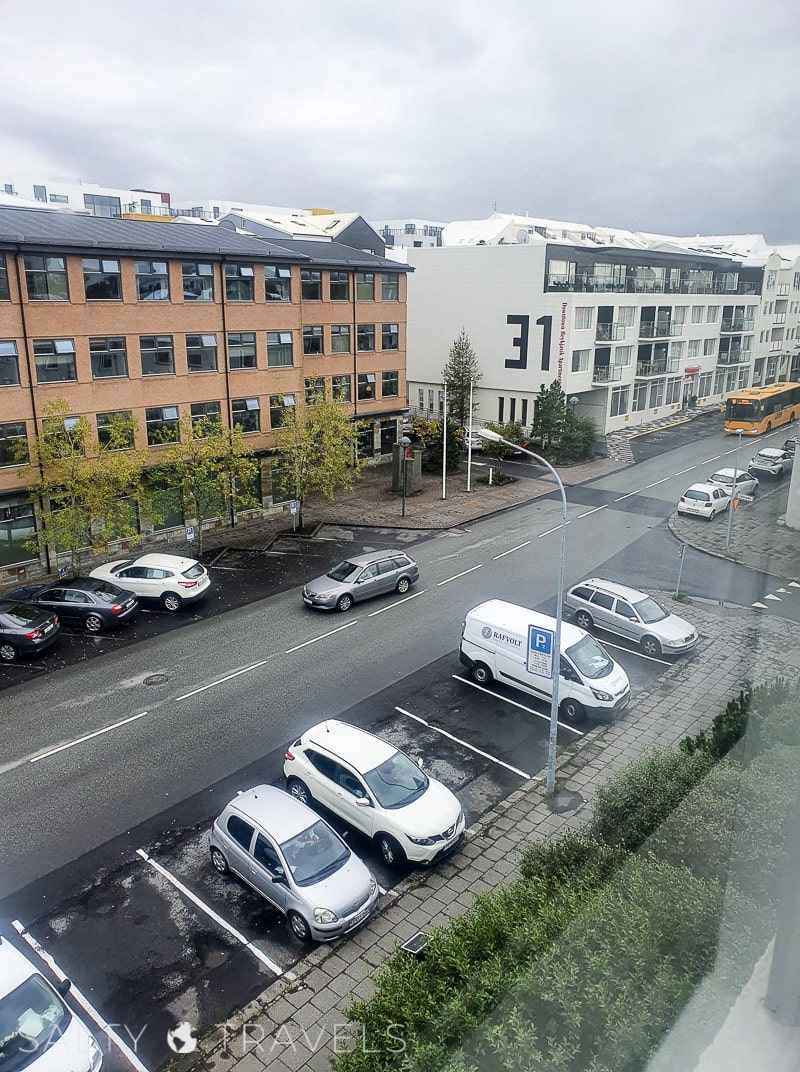 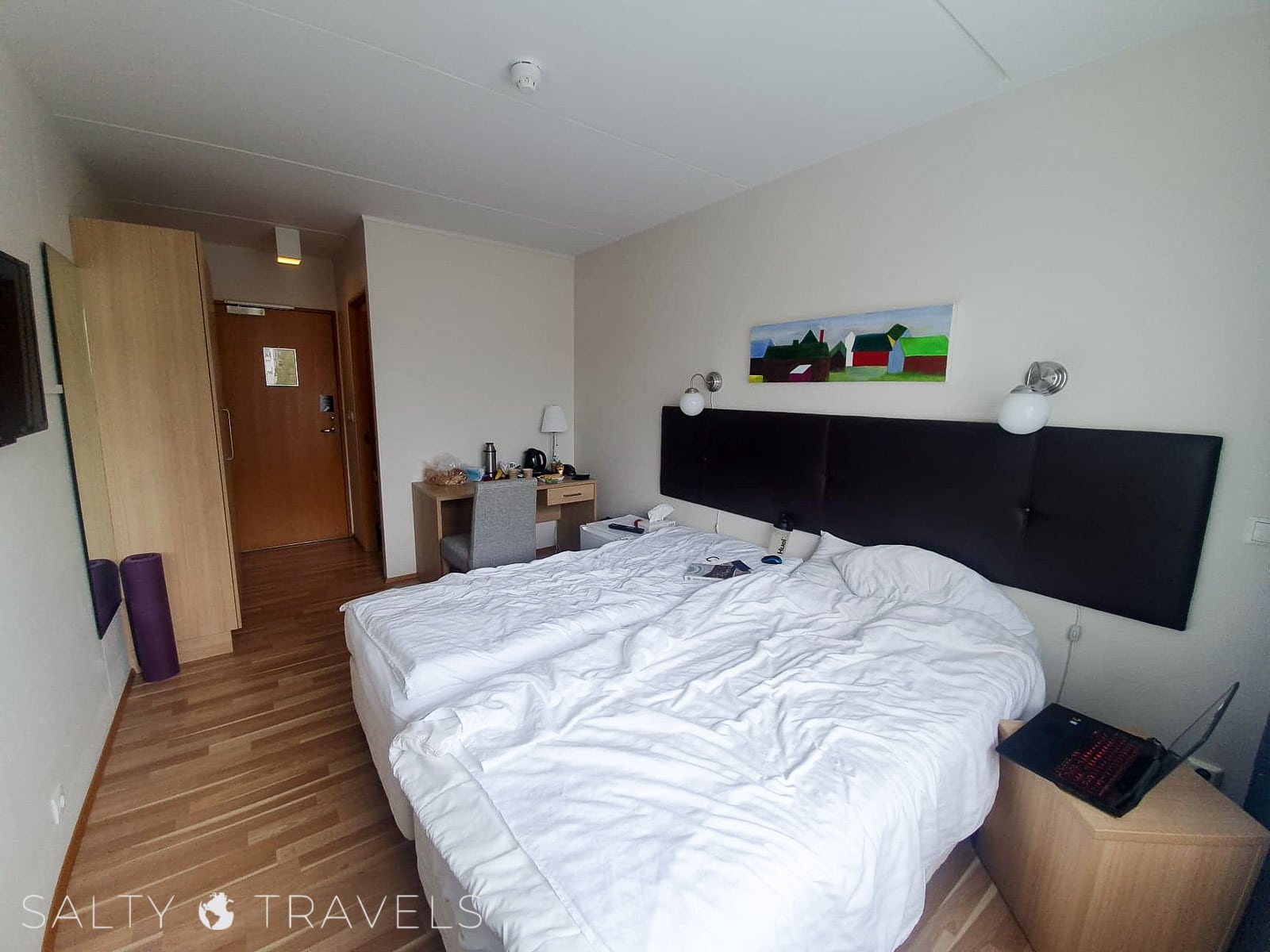 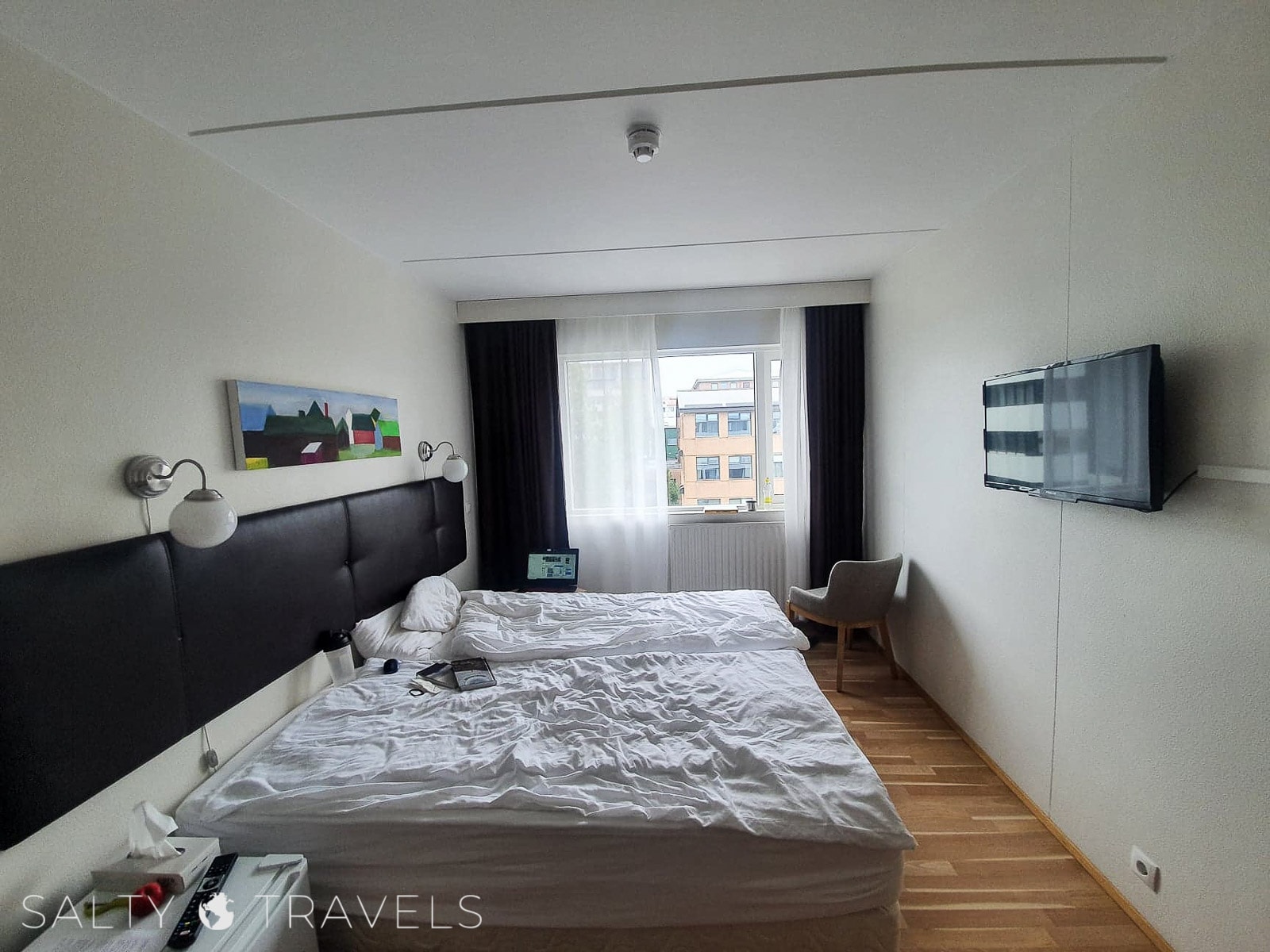 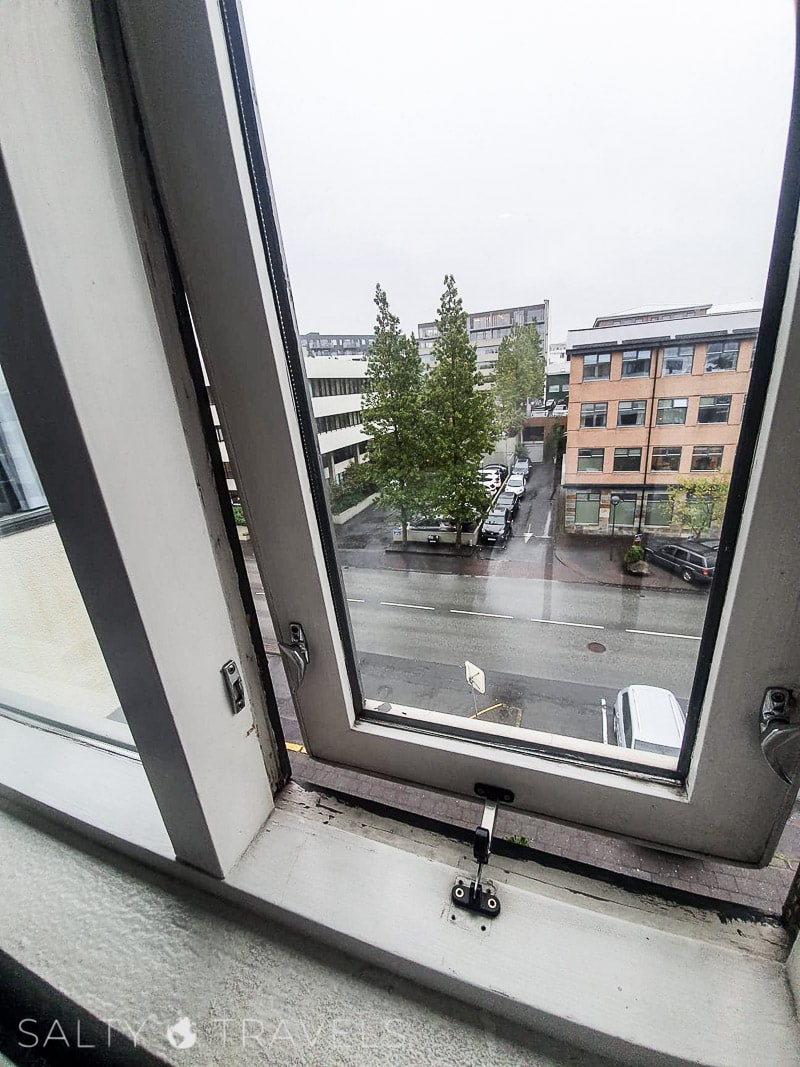 Food in the COVID-19 hotel in Reykjavik

The food in the hotel is also at the expense of Iceland. In the beginning, the lady who contacted me said that I cannot require vegan food. Nevertheless, when I came to the hotel they asked immediately about allergies and diet and I got vegan dishes every day. The daily plan looked as follows:

+ if I wanted some snacks/drinks, it was not a problem either – I just had to call the reception 🙂

Food was delivered to my room by the hotel staff. Every time they came, they waited in front of the door and asked if everything is alright. Once I didn’t open the door for a long time hoping that they would just leave the food at the door, but they didn’t go away. Probably they are obligated to check if the guests haven’t escaped or if they are still alive 😀 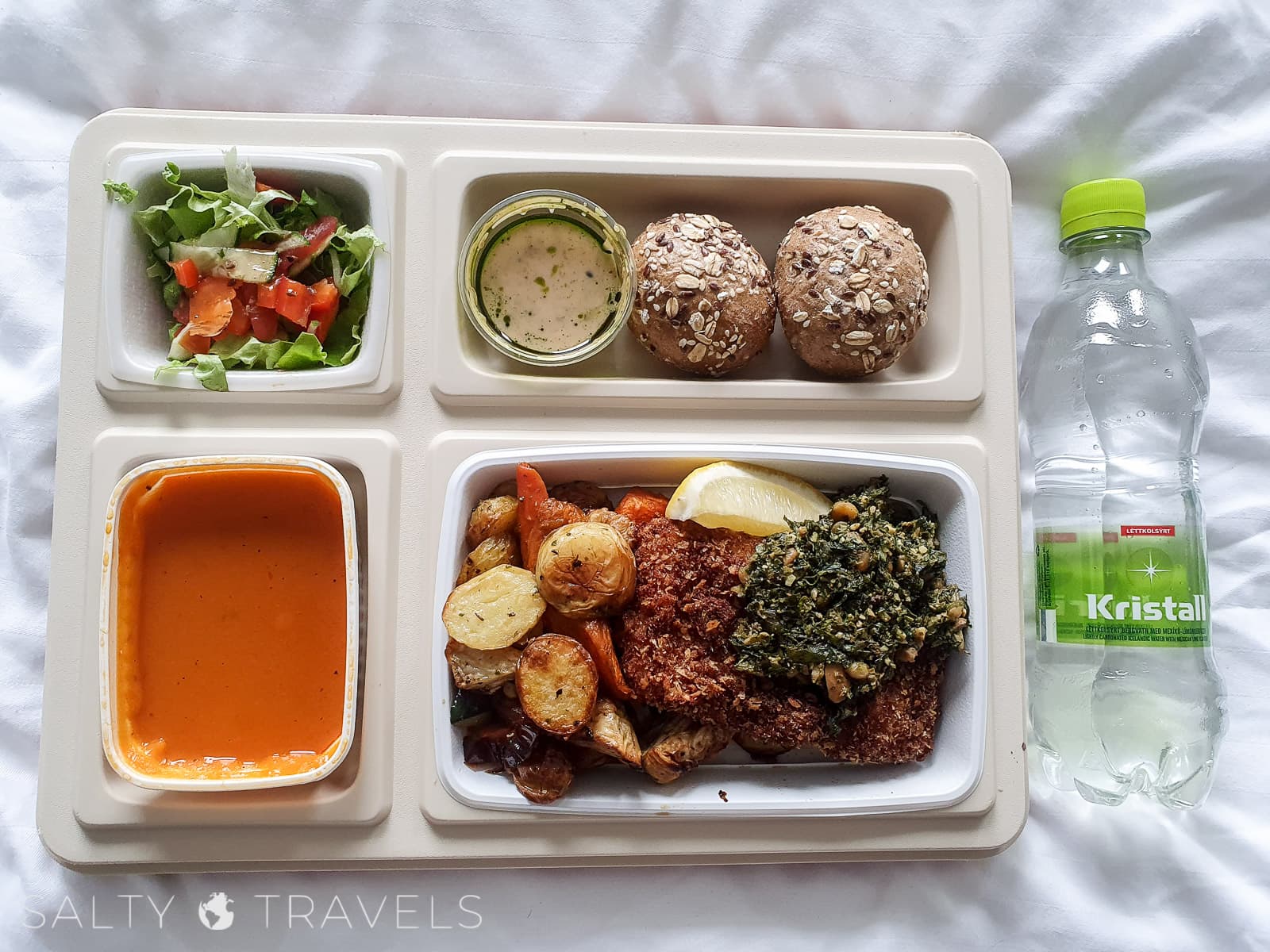 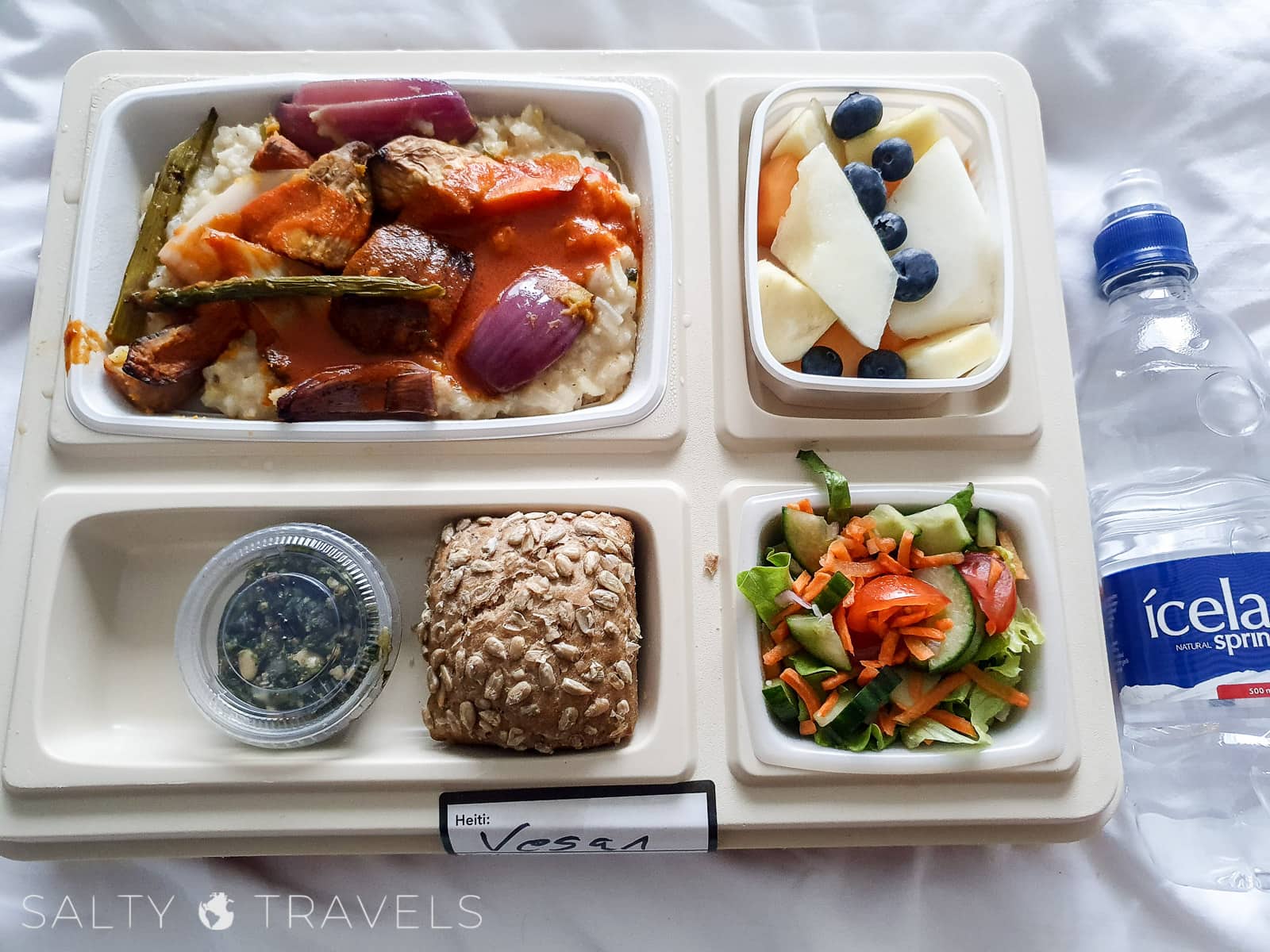 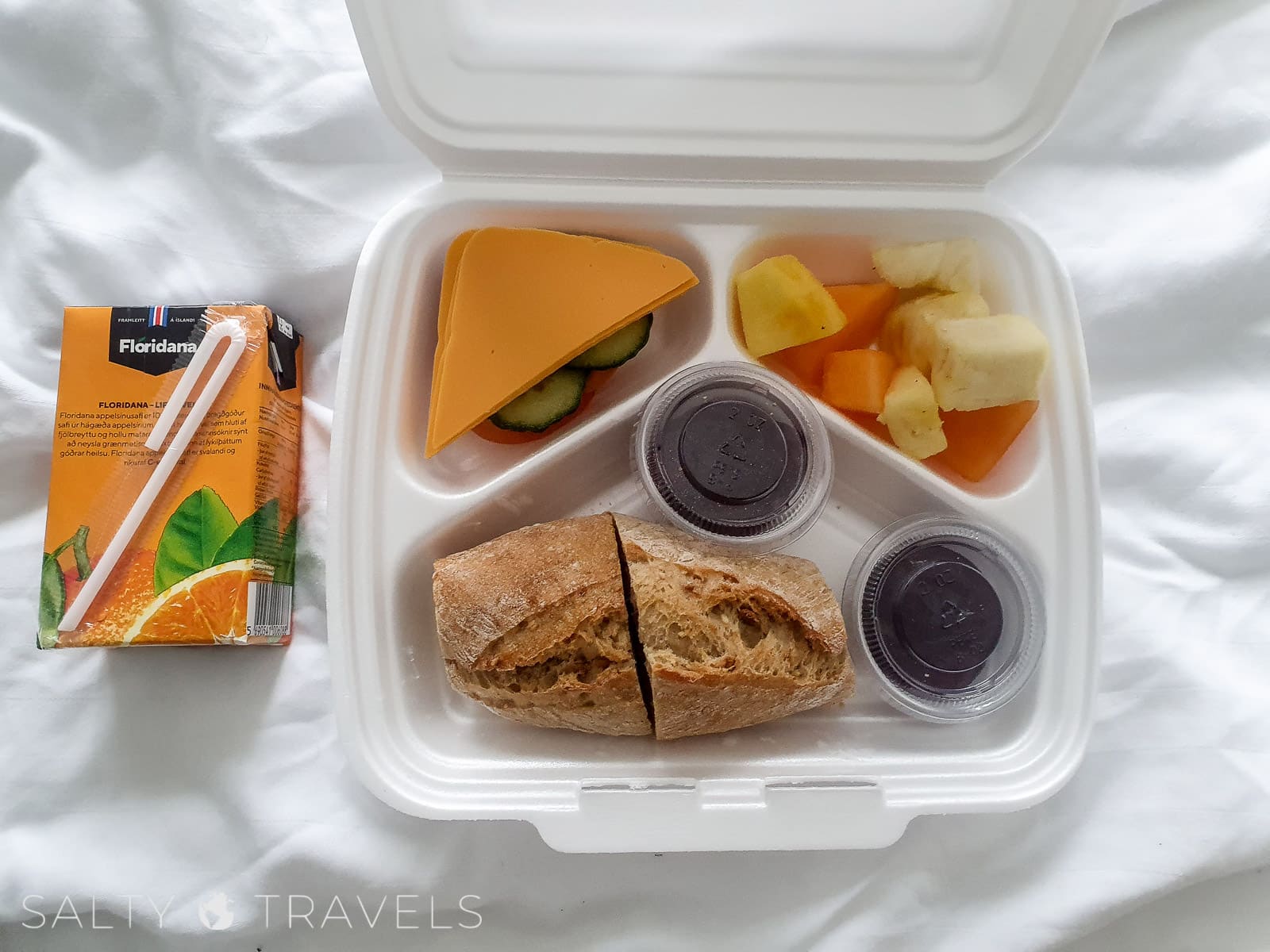 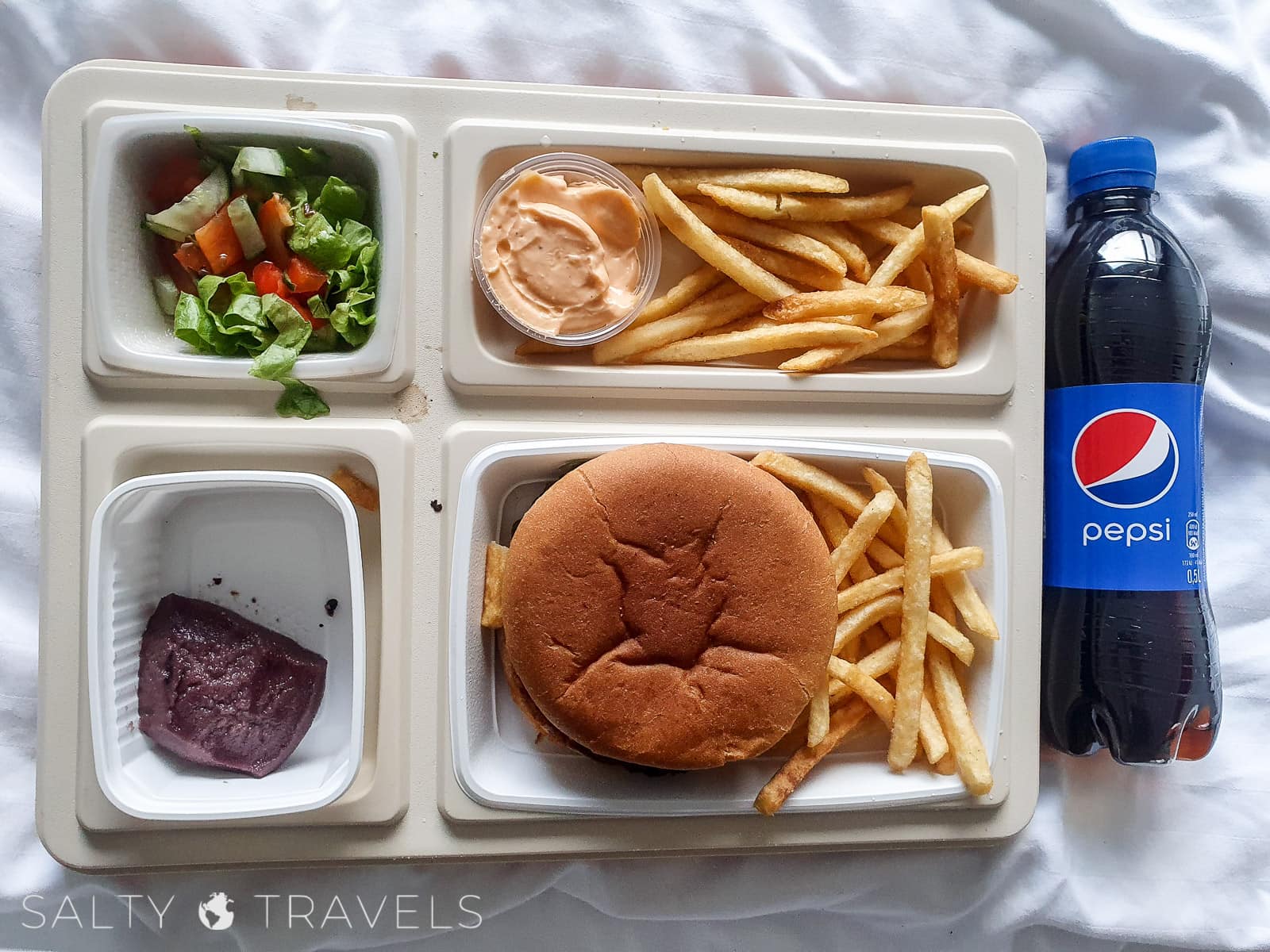 COVID-19 test after the first week of isolation

I spent a week in the hotel. According to what I was told before, I should have had another test after a week of isolation. It was supposed to be on Sunday or Monday. However, no one contacted me, so on Monday around noon I started asking about my test. It wasn’t until the afternoon that they realized they hadn’t tested me yet. First, then they made an appointment for me on Tuesday at 10:00.

I didn’t want to speed up the test appointment because I wanted my body to produce antibodies. Why? Because they told me the antibodies were the most important thing – even more important than the COVID-19 result itself. Apparently, even if I would be tested positive for COVID-19 again, but I would have antibodies in my blood, they would allow me to end the isolation. FYI: antibodies are produced about 7-14 days after being infected.

On Tuesday at 10:00, a taxi should come to pick me up at the hotel and take me for the test. It turned out that a minibus from the hospital arrived (I think they just call it a taxi). Before leaving the hotel, a staff member put me on a hospital gown and gave me a special mask. When I was walking out of the hotel and going to the car, security blocked the sidewalk between the hotel and the minibus so that no passers-by would have contact with me. Almost like for a celebrity – only the red carpet was missing 😀

The end of isolation in Iceland

I was supposed to have the results on the same day, but I got them on Wednesday around 2:00 p.m. It turned out the test was negative and I had antibodies – the best result possible. This meant that I was free and no longer in isolation or in quarantine. The hotel was immediately informed. A moment later I was called by the receptionist who asked when I am going to leave the room and if I still want to eat dinner.

I stayed there for 2-3 more hours to arrange the formalities with my insurance company. My insurance policy covered the cost of a flight to Poland and the accommodation after leaving the COVID hospital. The next flight from Iceland was on Saturday, so the insurance company found me a hotel for a few days. However, the room had no kitchen and I wanted to be able to cook myself. That’s why they told me I should find myself a place to stay, and the insurance will cover the cost up to EUR 100 per night. The next few days I spend going on small trips from Reykjavik to the nearby sights. 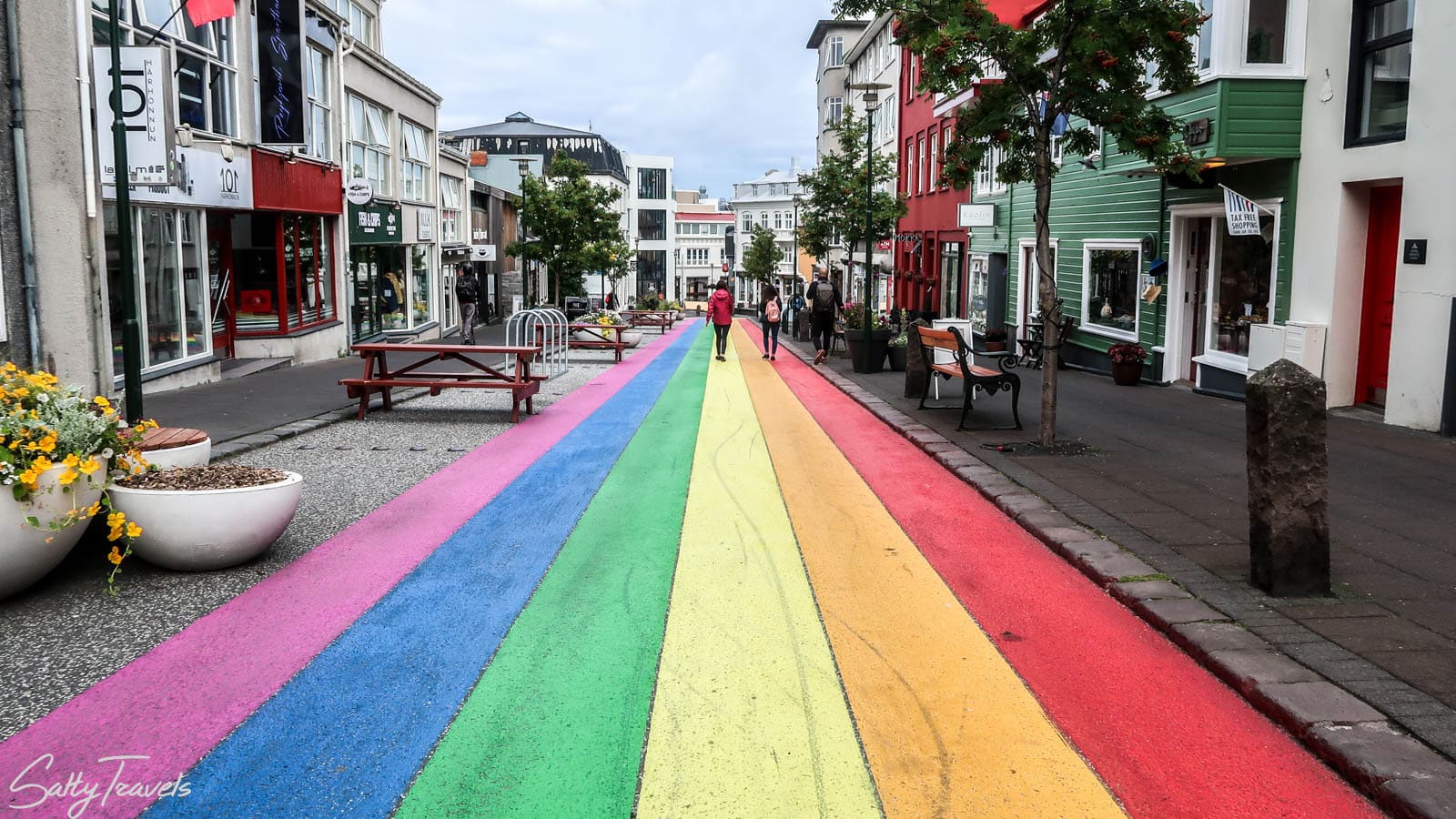 What to do during quarantine in Reykjavik? 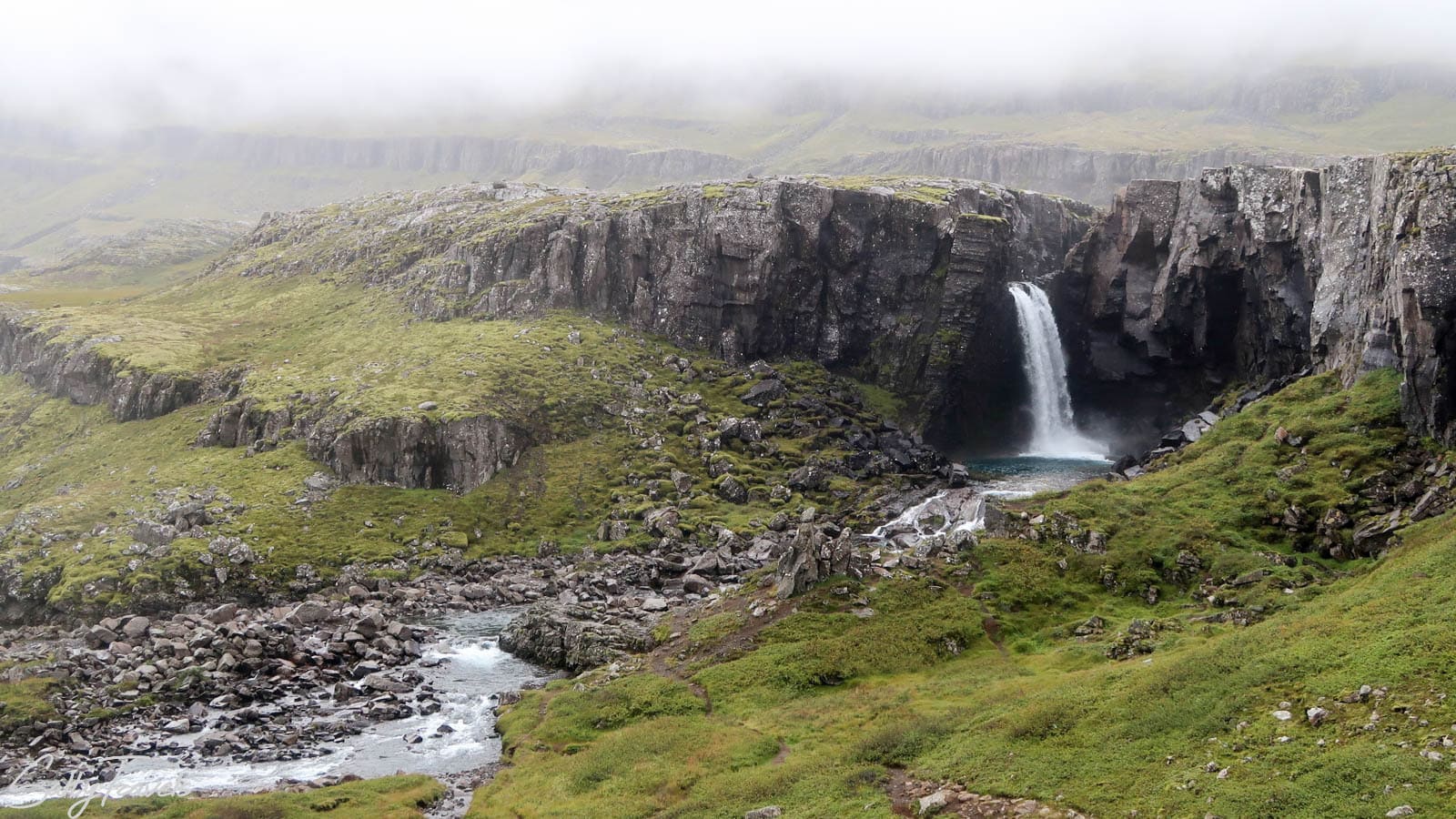 Travelling to Iceland during COVID-19: 2 tests and quarantine