Open Bus Ticket in Vietnam and why you definitely SHOULDN’T buy it!

If you plan to travel Vietnam from the north to the south or the other way around you surely heard about the Open Bus Ticket. It’s one ticket that allows you to travel the whole country – something like the hop on hop off busses but on bigger distances. Thanks to that you pay once and theoretically, you don’t have to worry about the transport anymore. You just book the single trips from one city to another on the way. Sounds quite convenient, right? So why would I advise you to NOT even consider buying this ticket? Let’s find out!

HOW DOES IT WORK? AND HOW MUCH DOES IT COSTS?

Open Bus Ticket can be bought in every travel agency. You can also try directly at your accommodation. When you buy the ticket you have to decide in advance which places you want to go to. You will get a small book looking like a chequebook. Inside there will be separate tickets for every distance. When you get on the bus half of the ticket will be ripped off. Also, places on the bus have to be booked in advance. Be aware that before getting on the bus you have to take off your shoes. The buses have mostly two floors of semi-laying seats in two or three rows.

In Vietnam, there are many different bus companies that offer such tickets, e.g. Queen Caffe, Camel Travel, Hung Thangh Travel, etc. All of these companies offer very similar low standard services and have very bad opinions on Gmaps and Tripadvisor. The prices are mostly the same. However, you will get the cheapest tickets directly at the offices of the bus companies. Accordingly to the price list of Hung Thangh Travel a ticket for 6 rides from Hanoi to Saigon costs 780.000 dongs (around 34 USD). We bought a ticket for 7 rides including Ninh Binh – Phone Nha – Hue – Hoi An – Nha Trang – Da Lat – Mui Ne – Ho Chi Minh (Saigon) and paid 1.300.000 dong (around 55USD). There is a difference in the price because we had one ride more and we bought the ticket from our host in Tam Coc. In addition, the Open Bus Ticket can be also bought at travel agencies but sometimes they have really big provisions (e.g. HTS Tour offers a ticket for 7 rides for 90 USD). WHY SHOULDN’T YOU BUY IT?

The price of the Open Bus Ticket isn’t a lot cheaper than single tickets bought separately for every ride. I calculated the prices and it turned out that if we would buy the tickets separately on 12go.asia they would cost 64 USD (including the provision of the website). It’s only 9 USD more than the Open Bus Ticket and you can definitely still find the tickets cheaper if you will buy them off-line.

BOOKING THE RIDES BY PHONE

When we were buying the tickets from our host in Tam Coc he told us that we can book places on the bus by phone. On every ticket, there were numbers to different offices in every city. For us, this was very convenient because we didn’t have to search for travel agencies to book or buy them. However, very quickly it turned out that booking by phone is not possible and we had to do this personally in the offices of Hung Thangh Travel. This makes travelling with an Open Bus Ticket very complicated because you have to go every time to the offices that are mostly not located in the city centre. At the end of the day, it would be much easier to book them in the travel agencies or online.

SEATS IN THE BUS

There is also no possibility to book specific places, e.g. two next to each other or in the front. On the one hand, if you enter the bus at the beginning of its route then there will be a lot of other passengers squeezing in front of the door to take the best places. On the other hand, if the bus will come to pick you up in the middle of the route and you will be the last one to enter it, then be prepared that the only sit left will be the one on a three-person row at the end of the bus next to the toilet. Great, right? For me, every bus ride was a fight for good places because I have car sickness and can’t sit in the back.

If you buy an Open Bus Ticket you will always have to go back to the office of the company before the departure. It’s the place where the bus stops and there is no transfer included even if the place is outside of the city centre. At the same time, the tickets that you can buy at your accommodation always include pick up from the hostel.

Sometimes even the office is very far away from the bus stop so you will be driving there and back with different tuk-tuks and minibuses. Once we were changing the means of transport 3 times and got to the final bus 1,5h after we were picked up.

ONLY ONE TRANSPORTATION COMPANY

If you buy an Open Bus Ticket you will have to travel through Vietnam only with one company. That means even if for some reason you will not be happy with its services you will not have the possibility to change it. Moreover, it can also turn out that your company will have no places left for a specific day and time and you will have to wait till the next day. If you wouldn’t buy the Open Bus Ticket you could go to any other company and ask for free seats.

CHANGES TO THE ROUT

It can also happen that during your travel somebody will recommend you a place off the beaten path and you will like to change your plans. If you buy an Open Bus Ticket you can’t change the route and you will have to buy additional tickets.

Every company has a little bit different timetables. In case the schedule offered by your Open Bus Ticket company will not suit you, you will have to buy additionally another one or change your plans. We had such a situation in Mui Ne because we wanted to go by evening bus but our bus company offered only buses during the day. That’s why we had to buy additional tickets from another bus company. As a result, we lost money for one ride with the Open Bus Ticket, because you can’t give it back or get a refund.

ONE MEANS OF TRANSPORT

The Open Bus Ticket allows you only to travel by bus. In the beginning, it doesn’t sound like a bad idea but after experiencing the low standards in the buses you dream about a train, boat, scooter or anything else.

Be aware also of the fact that there are different companies in the north and in the south of Vietnam. Even if you buy an Open Bus Ticket in the north you will most probably be driving with the buses of the competitors, minibuses or local transport in the south. It depends with whom your company cooperates in the south. # 5 QUALITY OF THE SERVICE

I put this argument at the end because it will most probably apply not only to the Open Bus Ticket but all buses in Vietnam. It doesn’t change the fact that I experienced a lot of really unpleasant situations when travelling with Hung Thangh Travel.

The buses belonging to Hung Thangh Travel were in very bad condition. Theoretically, there was the possibility to put the back of the semi-sleeping chair up but in practice, this mechanism was almost always broken. That’s why you had to lie down the whole trip even during the day. Moreover, at least two times the safety belts were broken. The seats had holes and they had black spots because they were so dirty. Above the feet, there was a small table always covered with sticky spots, used chewing gums and small pieces of old food. Furthermore, the toilet’s container was always full. Next to the toilet, there was the car’s engine which heated the container up so when went inside you were literally breathing in fumes of faeces and chemicals.

Once, when the bus was almost full I put my bag on the first free seat and went further inside to find another one for Alex. In the meantime, one man from the staff started to extremely shout at me in Vietnamese. Of course, I didn’t understand a word, so he started to shout even louder and became aggressive. When I came back to my seat my bag wasn’t there. He threw it from the upper seat on the floor. All staff that I had inside was lying on the floor, together with my phone, camera, power bank…

Every time when we were booking seats I asked for places at the front because I have car sickness but it never worked. So once when I entered the bus and saw a paper with the word “reserved” on it I was pretty angry and decided to take the seat and put the paper behind. When the driver realised that he came to me and was literally yelling at me. His face was completely red from anger and he was trying to yank my arm. I got scared and changed my seat. Of course, it turned out it was reserved for a Vietnamese woman…

Discrimination of foreigners in the buses was happening every day. Vietnamese people could enter the buses first even when they were standing at the end of the queue. They also always got the best places in the front. Sometimes the staff was even so deceitful that they yelled at you to make you scared so you will move to the back.

Additionally, we also had situations when the drivers were smoking several cigarettes inside the bus. Often the drivers were also taking people to the bus that were standing on the side of the road. They were sitting on the floor so you couldn’t even go to the toilet and the additional stops made the journey longer. 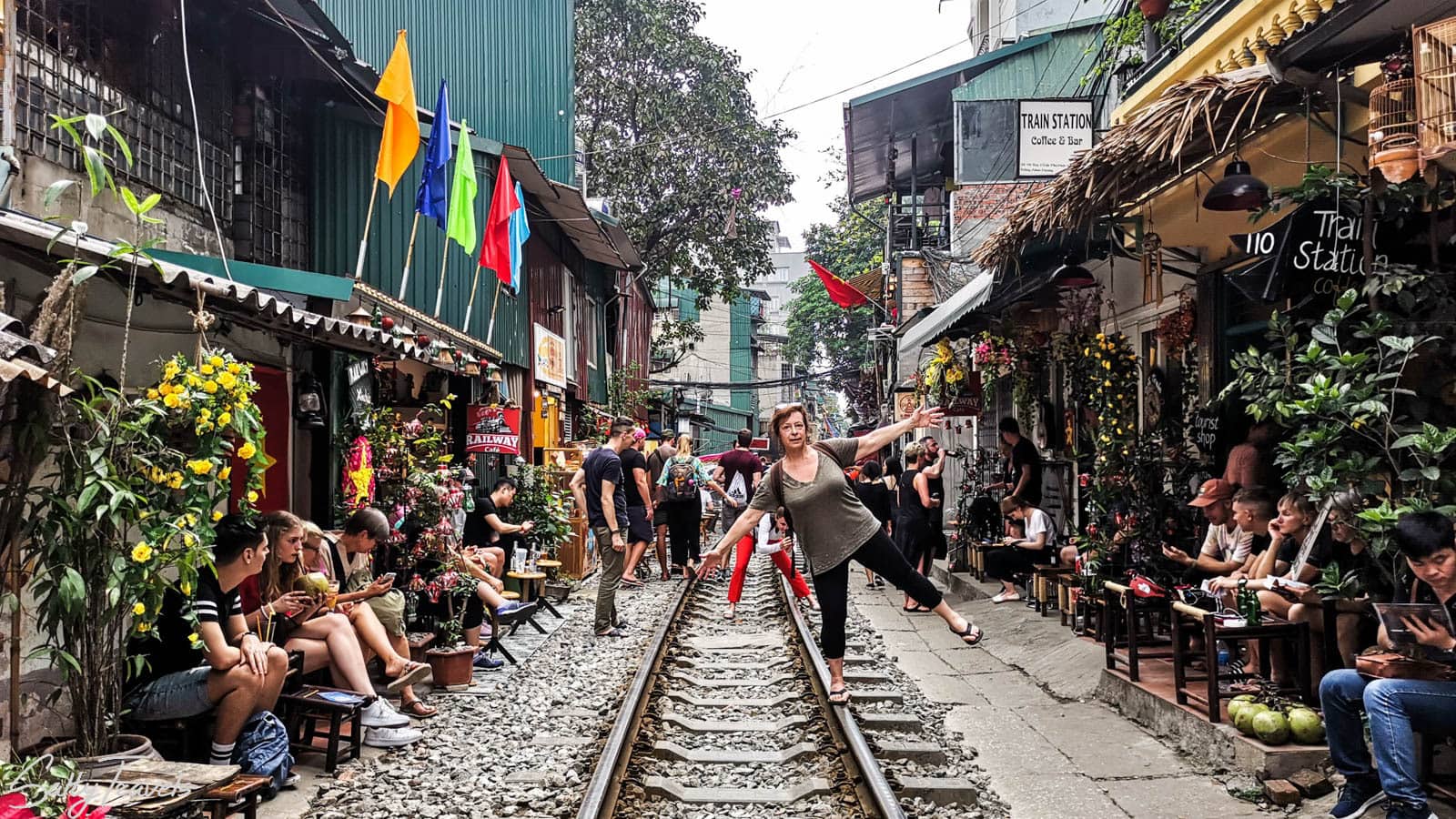 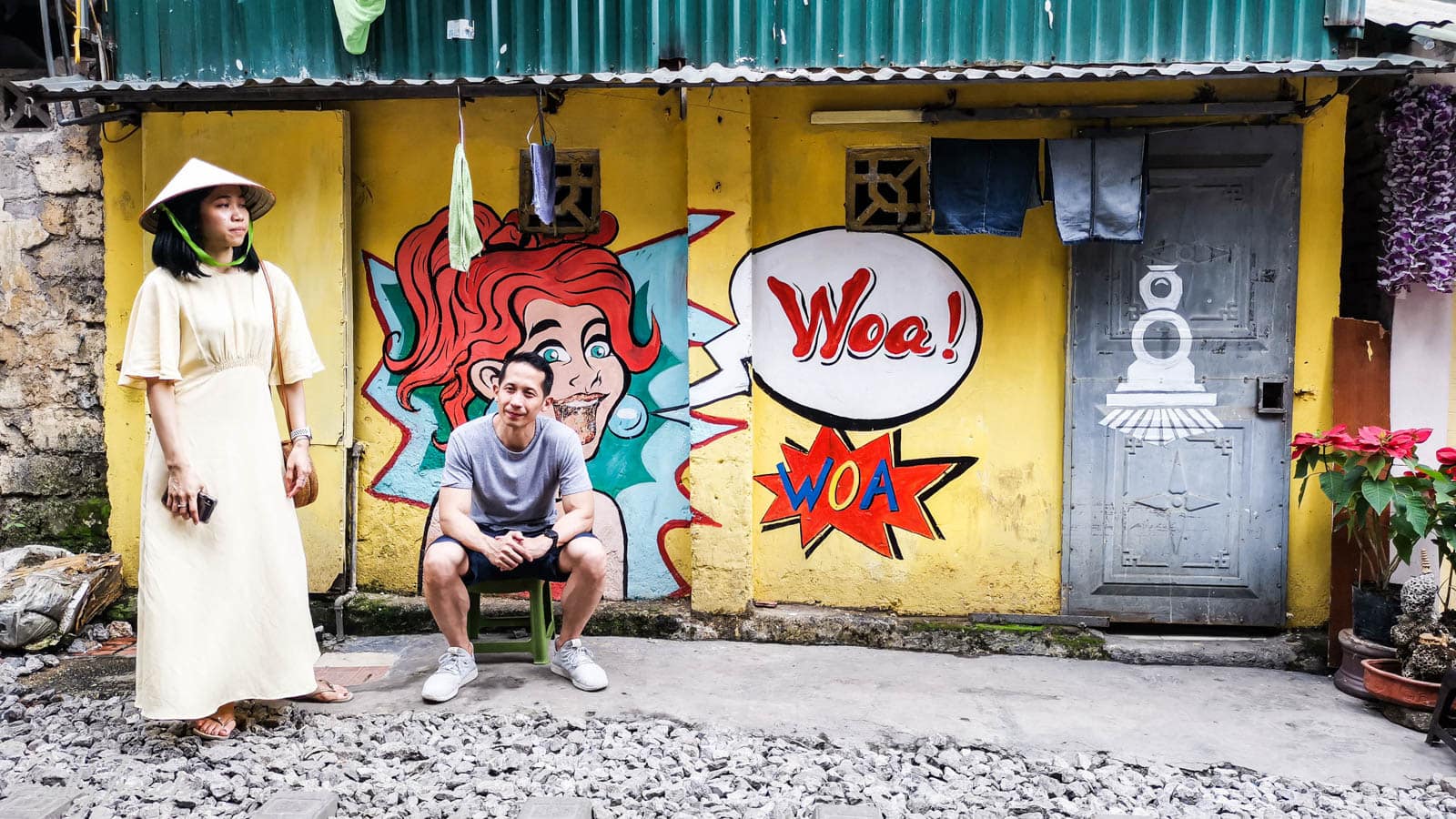 Hanoi Travel Guide for Backpackers – All you need to know 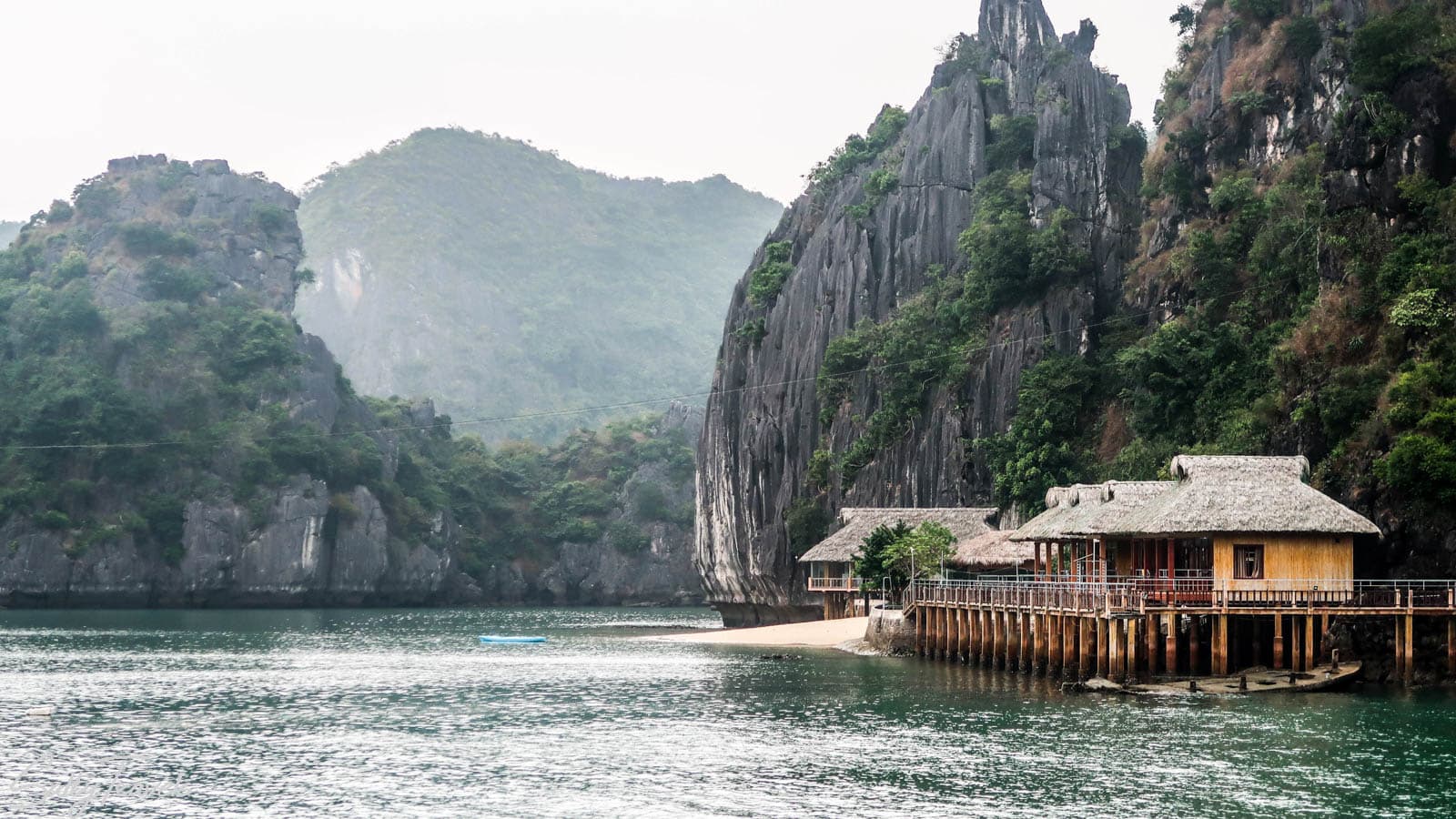 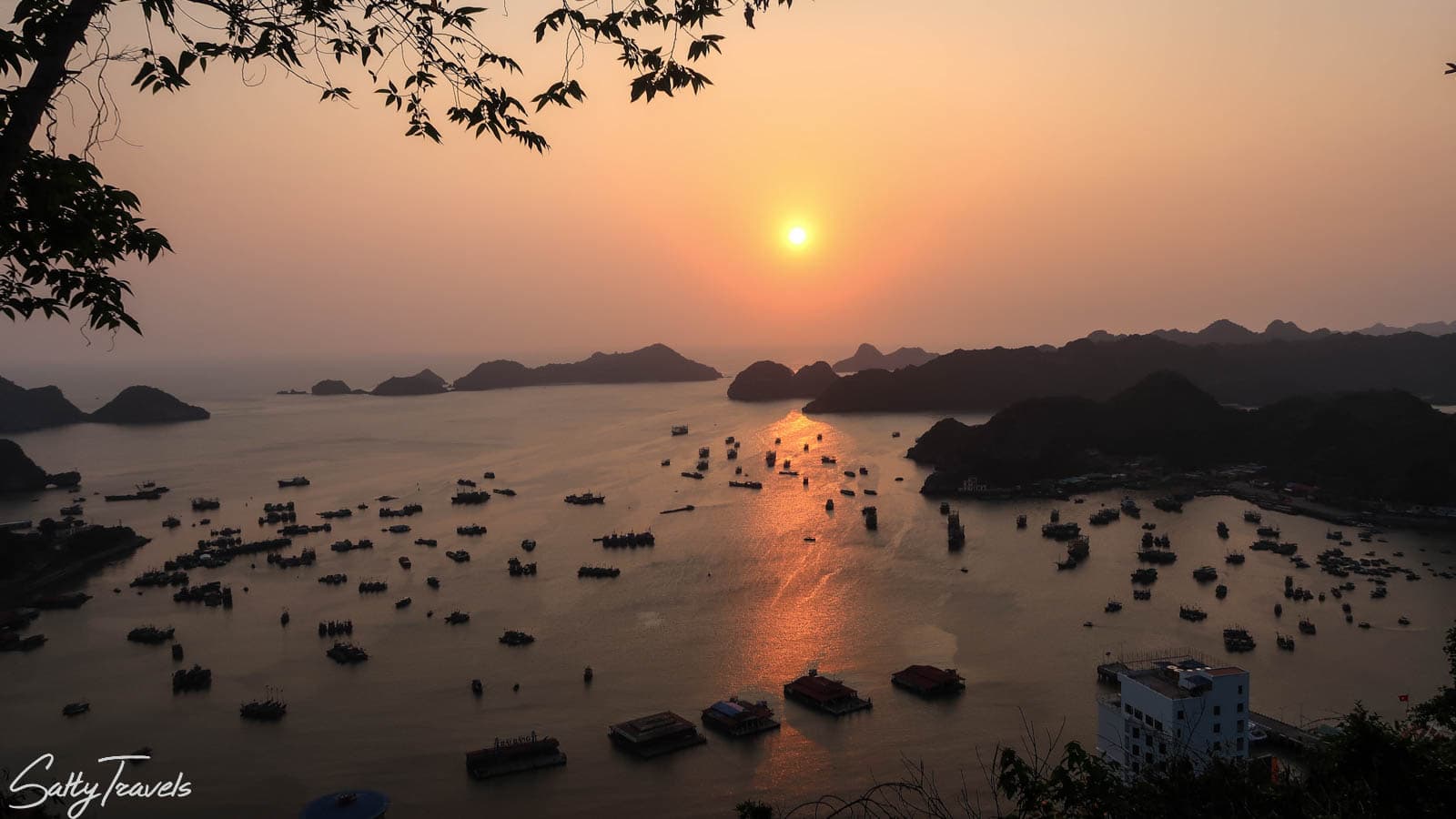 Cat Ba Island – all you need to know