Testing Water-to-Go in Nepal: Did The Bottle Pass The Test?

Water is one of the main topics to confront before embarking on a trek in the Himalayas. It is directly related to our safety and health, but also to the protection of the environment. There are several solutions.

You can buy bottled water on the trail, which generates unnecessary waste; you can fill your bottles at filtered water stations and then, unfortunately, carry that water with you; or you can use water purification tablets, which negatively affect the taste of the water.

However, there is also another solution. You can take a Water-to-Go bottle with you on the trekking in the Himalayas. When embarking on a 3-week trip to trek the Annapurna Circuit, I personally chose this option and tested Water-to-Go in Nepal. Did the bottle pass the test? Let’s find out 😉

The water in the mountain streams is perfectly clean compared to the water which can be found in Nepal’s capital city…. When I saw how littered the rivers were in Kathmandu, I thought the best test of the Water-to-Go in Nepal will be tap water in Kathmandu.

I know this was a risky move before embarking on a 10-day trek in the Himalayas. But I took the challenge and you know what? I was absolutely fine! I didn’t have any gastrointestinal problems, even though I refilled my bottle many times in hostel and restaurant bathrooms, among other places. 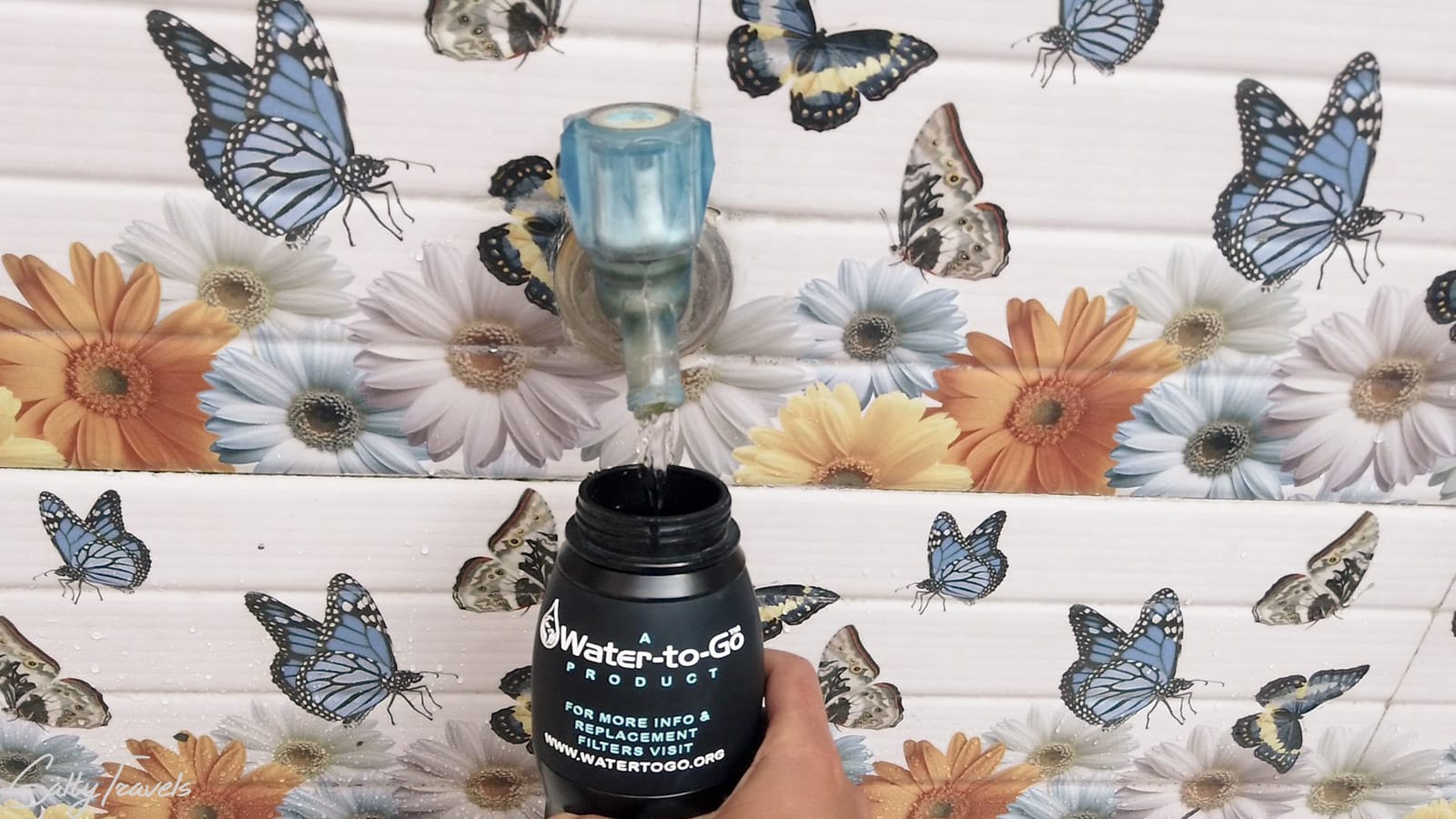 There is a lot of water on the Annapurna Circuit. Every now and then there is a river, stream or lake. And even if there won’t be any source of water on your way you trek anyways from village to village and there is always some water available.

Therefore, during the whole trek, I had no problem finding a place to fill my bottle. What’s more, I could very often enjoy fresh and cold mountain water straight from the stream. 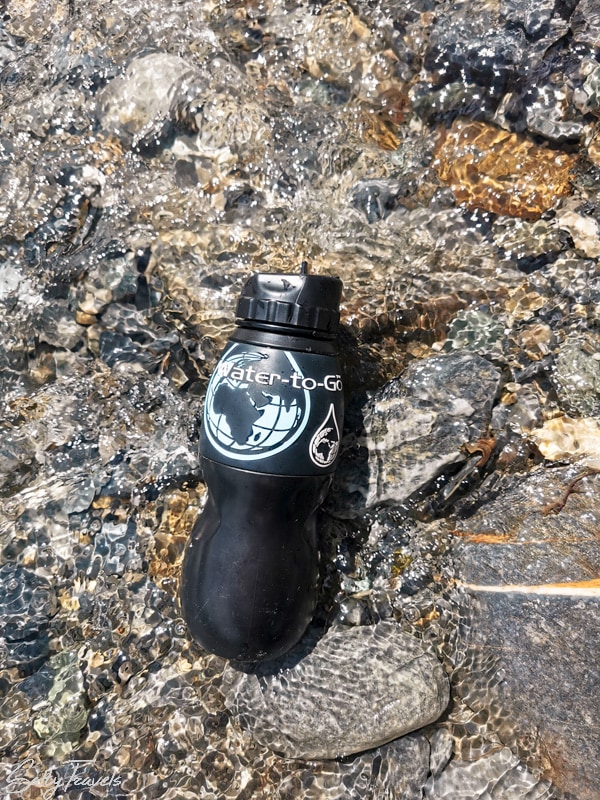 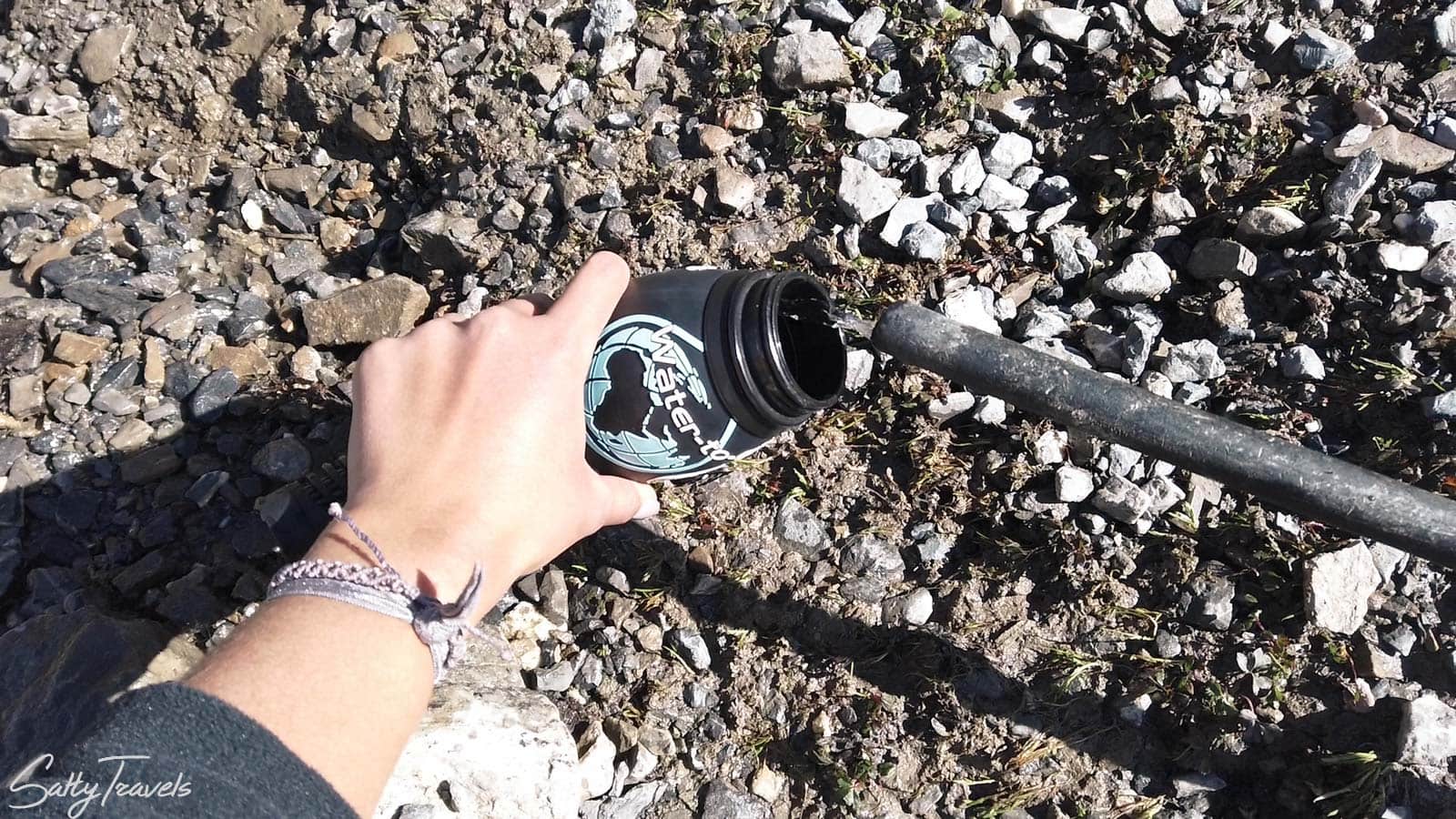 As mentioned before, you can’t complain about the lack of water on the Annapurna Circuit. However, there is one route, where it is definitely lacking. This is the section from Tilicho Camp to Tilicho Lake.

There are no easily accessible water sources or any villages along the way. Also, forget about filling your bottle when you reach the lake. The slopes leading directly to Tilicho Lake are very steep and high and in October they were covered in snow…

Did anybody say snow? Yes! That’s also a source of water and another possibility to test Water-to-Go in Nepal. So when I got to Tilicho Lake and found out that there is no possibility to buy water, I filled it with the purest snow I could find and put my Water-to-Go bottle in the sun. After 30 minutes I had delicious refreshing water!

Water from a barrel in the High Camp

Sometimes I had to use other sources of water while being on the trail. One of the riskiest was in the High Camp at an altitude of about 5,000 m. There were no bathrooms and no running water available to the guests. There was only a large barrel in the middle of the camp, from which many people took water to brush their teeth.

It was standing water, which means there could be some bacterias in it or some insects could easily lay their eggs there. When I looked into it, some small organisms of unknown origin were moving in it. Except that, it looked clean.

It was a little bit disgusting but I took the metal cup strapped to the barrel and poured the water into the Water-to-Go bottle – it filters bacteria and viruses so insects that are visible to the naked eye shouldn’t be a problem at all, I thought. And they weren’t. I drank a few bottles of this water and once again no stomach problems at all. 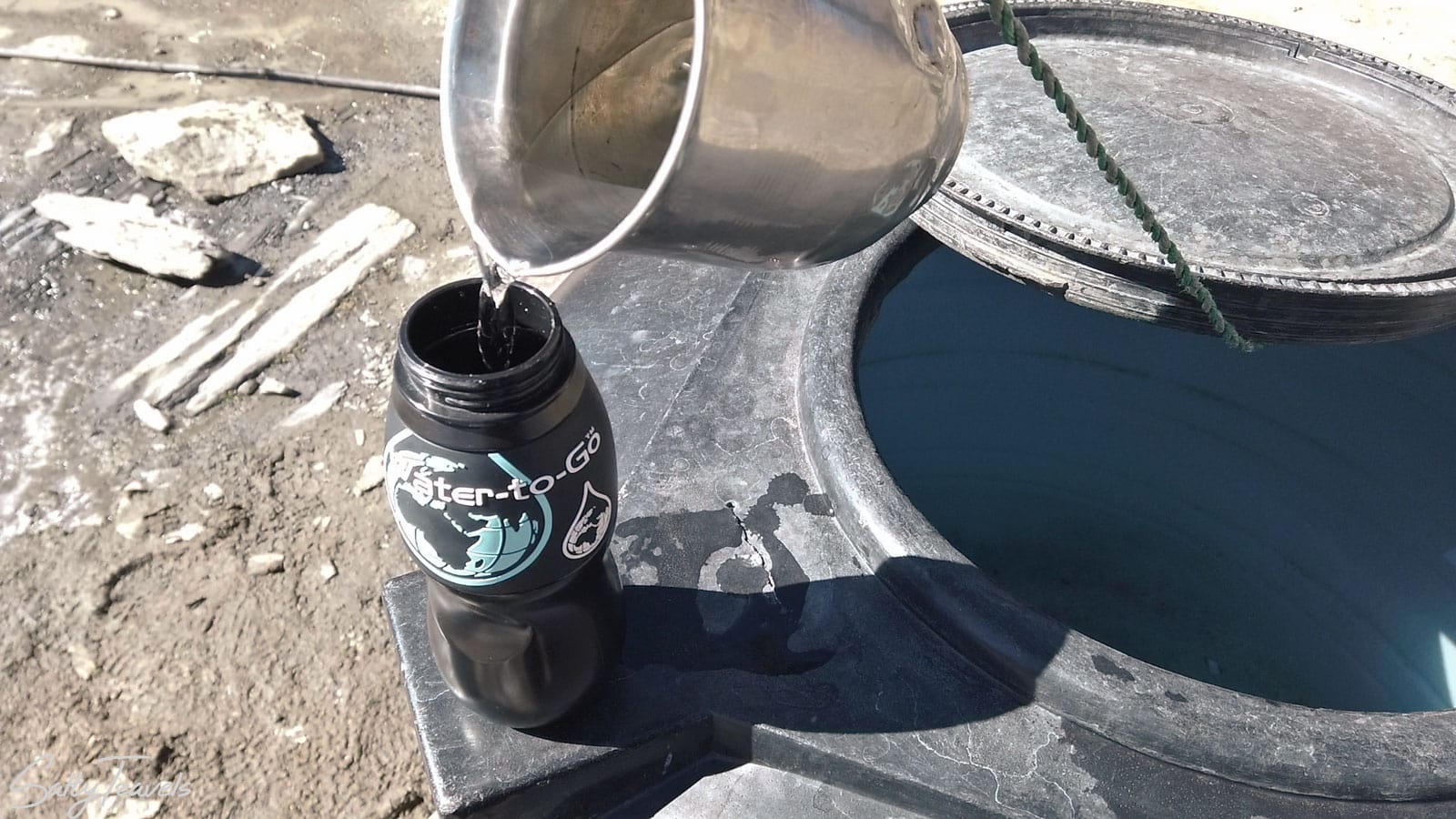 Water from pipes or street taps

In the sections before and after Thorong La Pass, so the more inhabited ones, streams or rivers are less common. It is more common to find taps or pipes with flowing water. As long as it seemed reasonably clean, I just filled my Water-to-Go bottle with water from them. 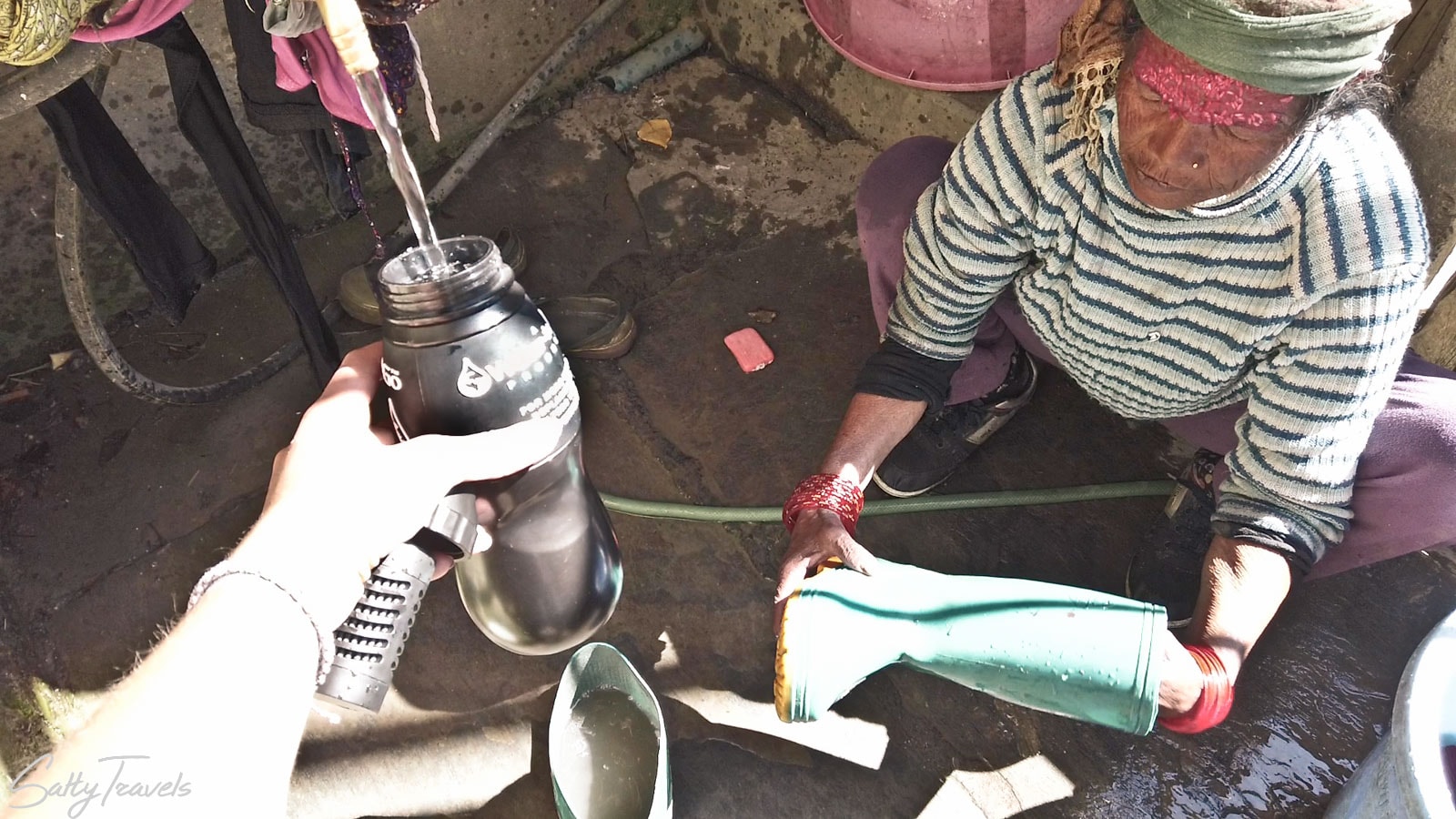 I tested the Water-to-Go bottle in Nepal in every possible way. I was filling it with water from different and often risky sources. However, unlike some other people on the trail, I didn’t have any stomach or intestinal problems during my 3 weeks in Nepal. The bottle filtered the water perfectly and since then it has always been my travel essential. I take it with me everywhere.

Why should you take a Water-to-Go bottle with you to Nepal? 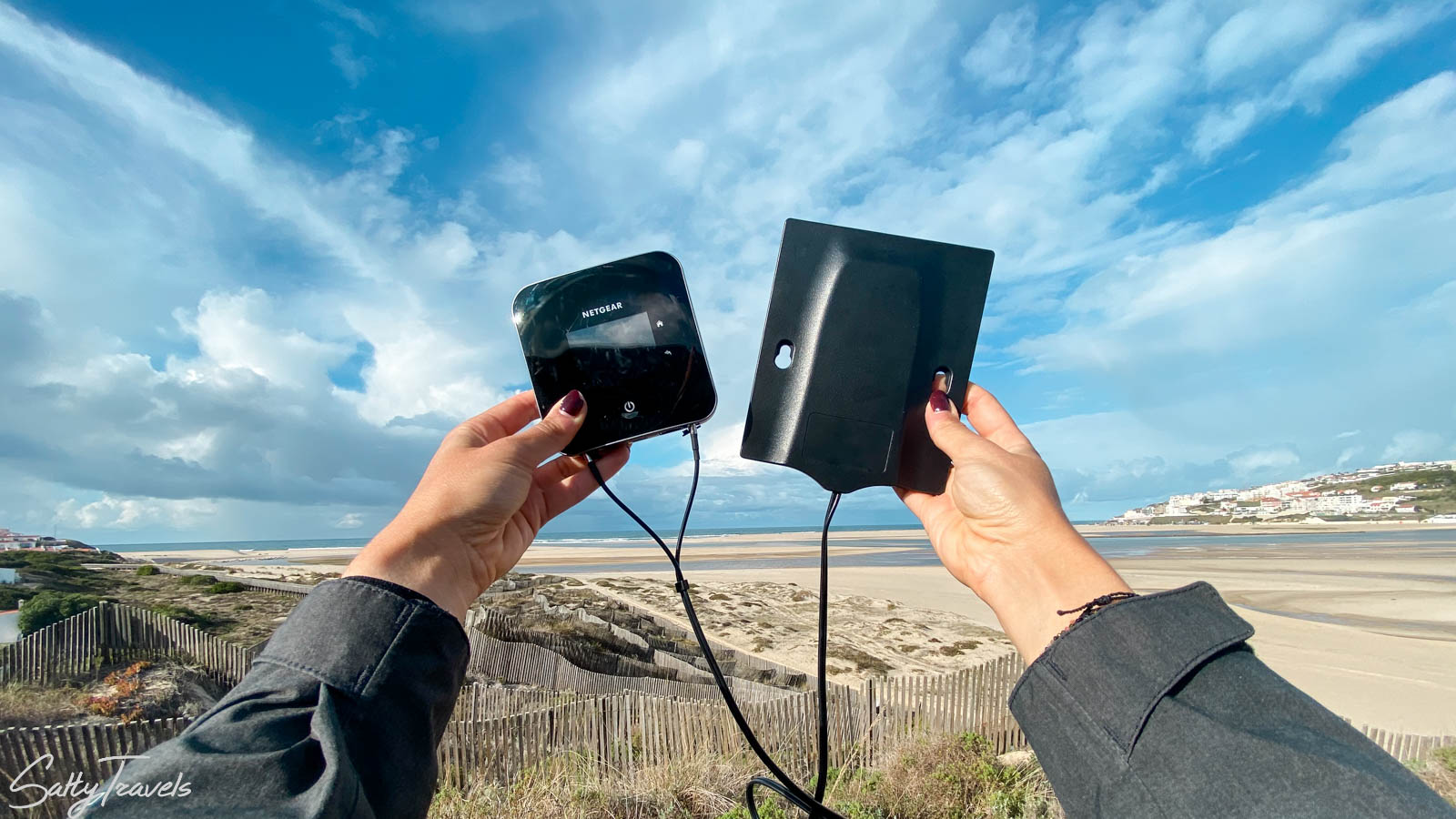 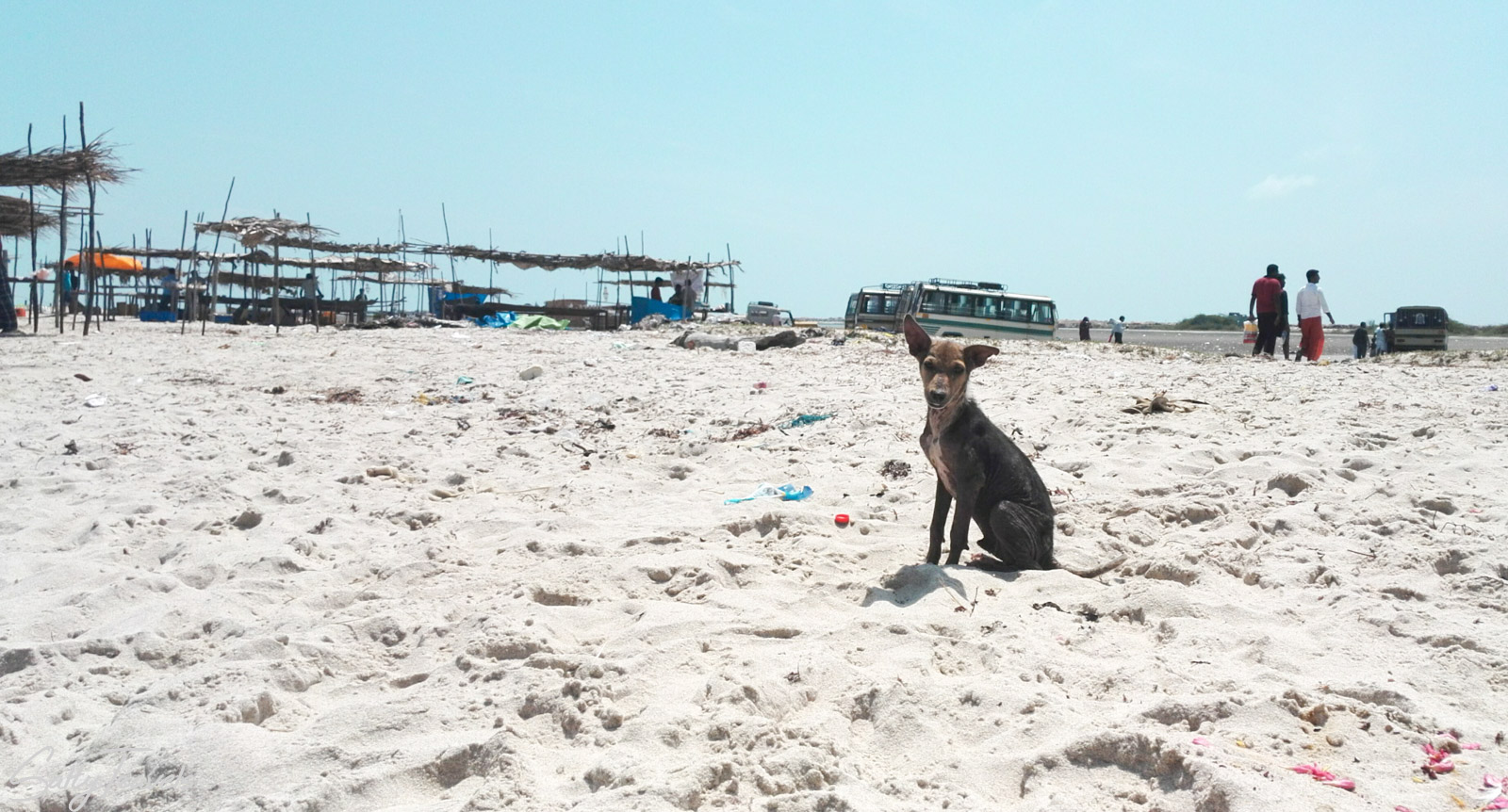 What To Do When You Find a Stray Dog or Cat While Travelling? 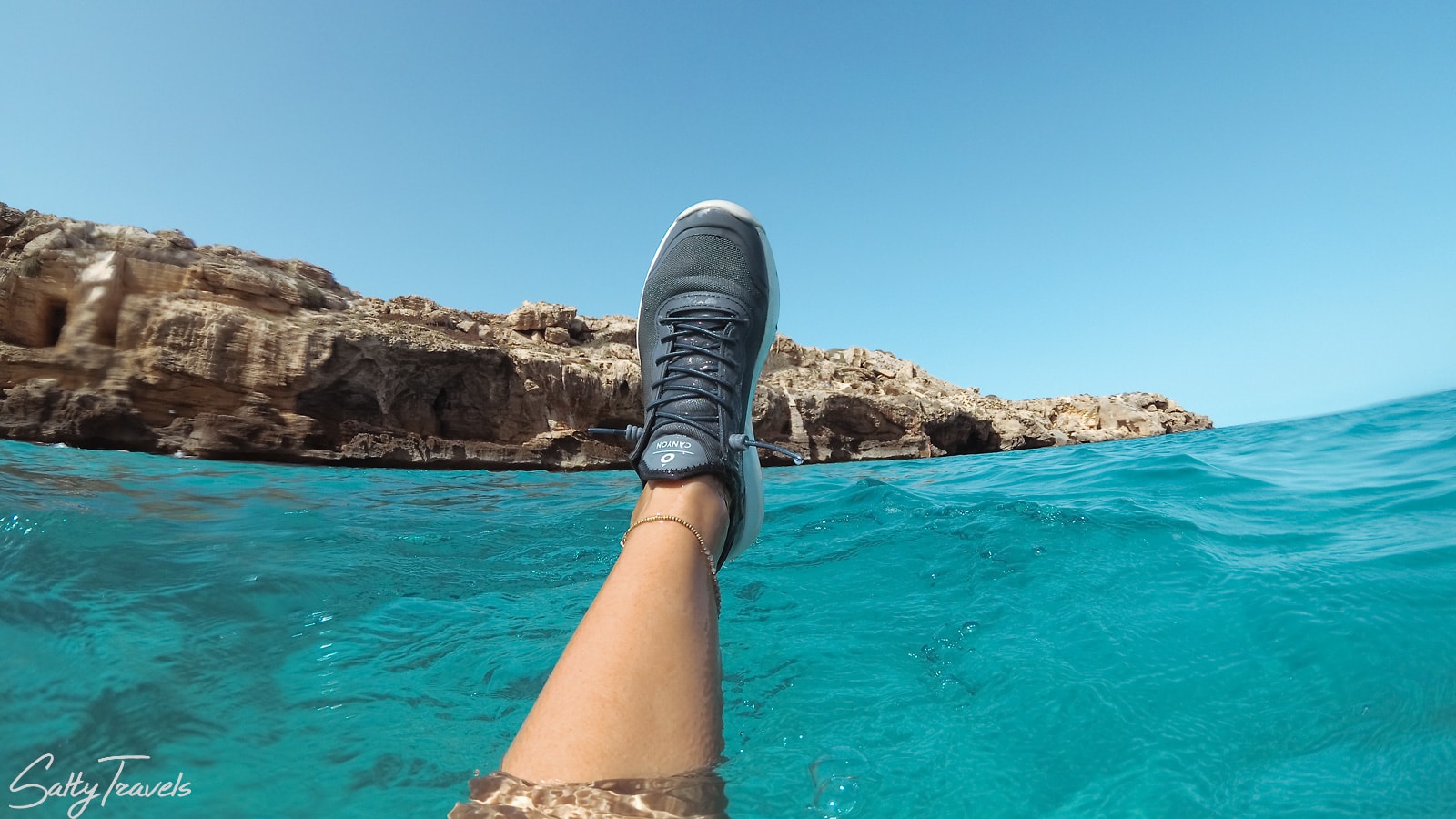 Tropicfeel shoe review: Are they worth buying?