Trip to Butrint – sightseeing in Albania

In May the weather in the Balkans can be unpredictable. One day it’s very sunny and the next day the whole sky is covered with heavy dark clouds and from time to time it may even rain. This applies not only to the North of the country but also to its southern part. So despite its proximity to Greece, there is no guarantee that the weather will be good enough for sunbathing in spring. If you are around Ksamil or Saranda and the weather destroys your vacation plans, a nice alternative might be visiting Butrint. It’s an ancient settlement inscribed on the UNESCO World Heritage List. You can walk there between the ruins of Greek and Roman buildings and get to know Albanian history a little bit.

How to get to Butrint?

Butrint is located in the very south of Albania, not far away from the Greek border. Coming from Saranda or Ksamil just follow the coastline to the South. The proximity to the mentioned cities means that visiting Butrint can serve as an attraction for a half-day trip, for example on a cloudy day. Getting there by car from Ksamil takes about 20 minutes. Next to the archaeological park, there is a free parking lot, where you can leave your car. The road itself ends with a river, which can only be crossed towards Greece by using a raft ferry.

We visited Butrint on the 1st of May, which is a holiday in Albania. For this reason, a large number of tourist buses were at the parking lot. They brought not only Germans, who judging by the high number of them apparently fall in love with Albania recently, but also Albanian kids. Also, all the important spots are next to each other: the entrance, the parking lot and the ferry. That’s why the area seemed pretty crowded when we arrived and there was a traffic jam. However, it turned out that inside the area was very large so only the queue to the toilet reminded about the high number of visitors. 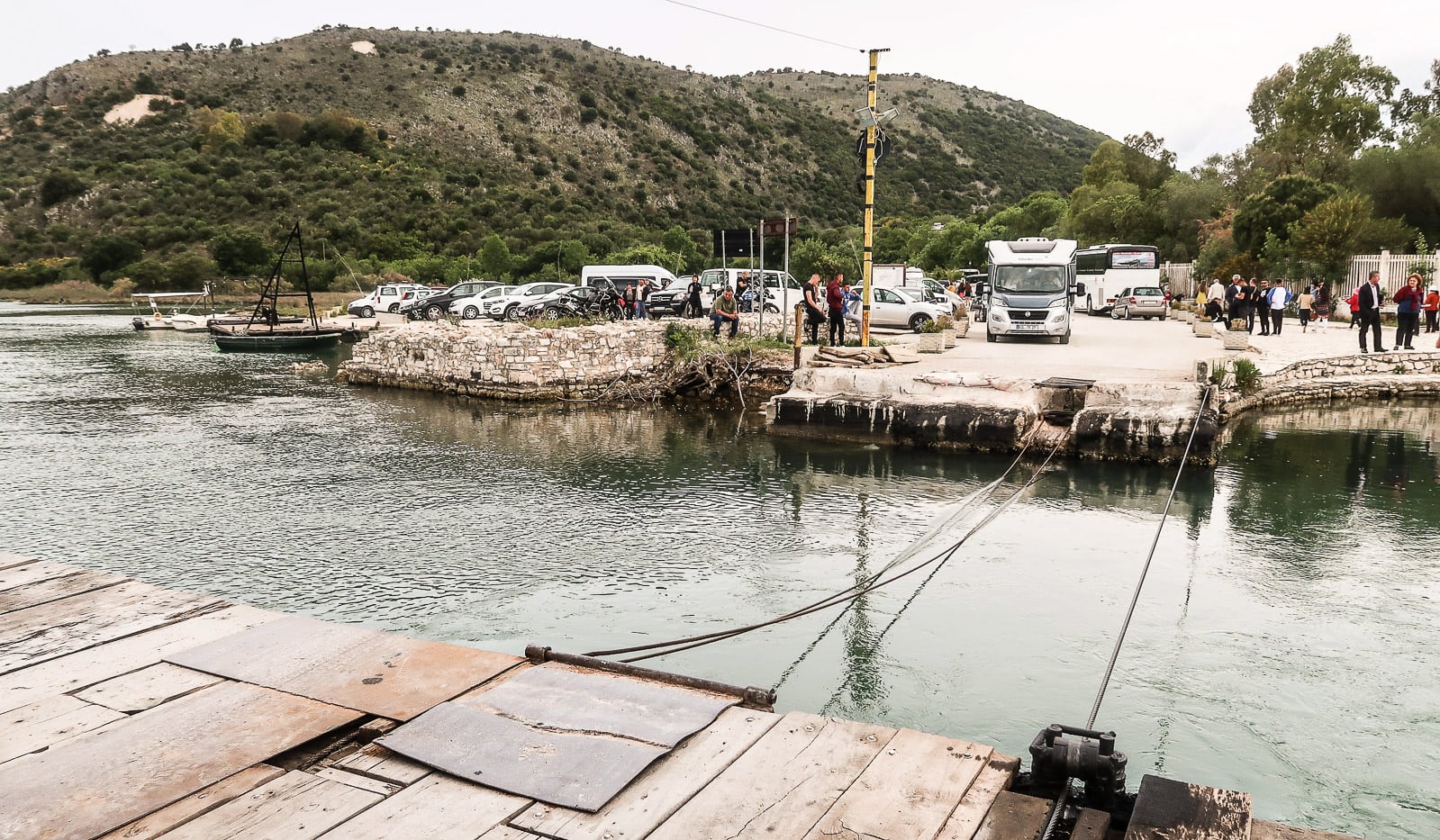 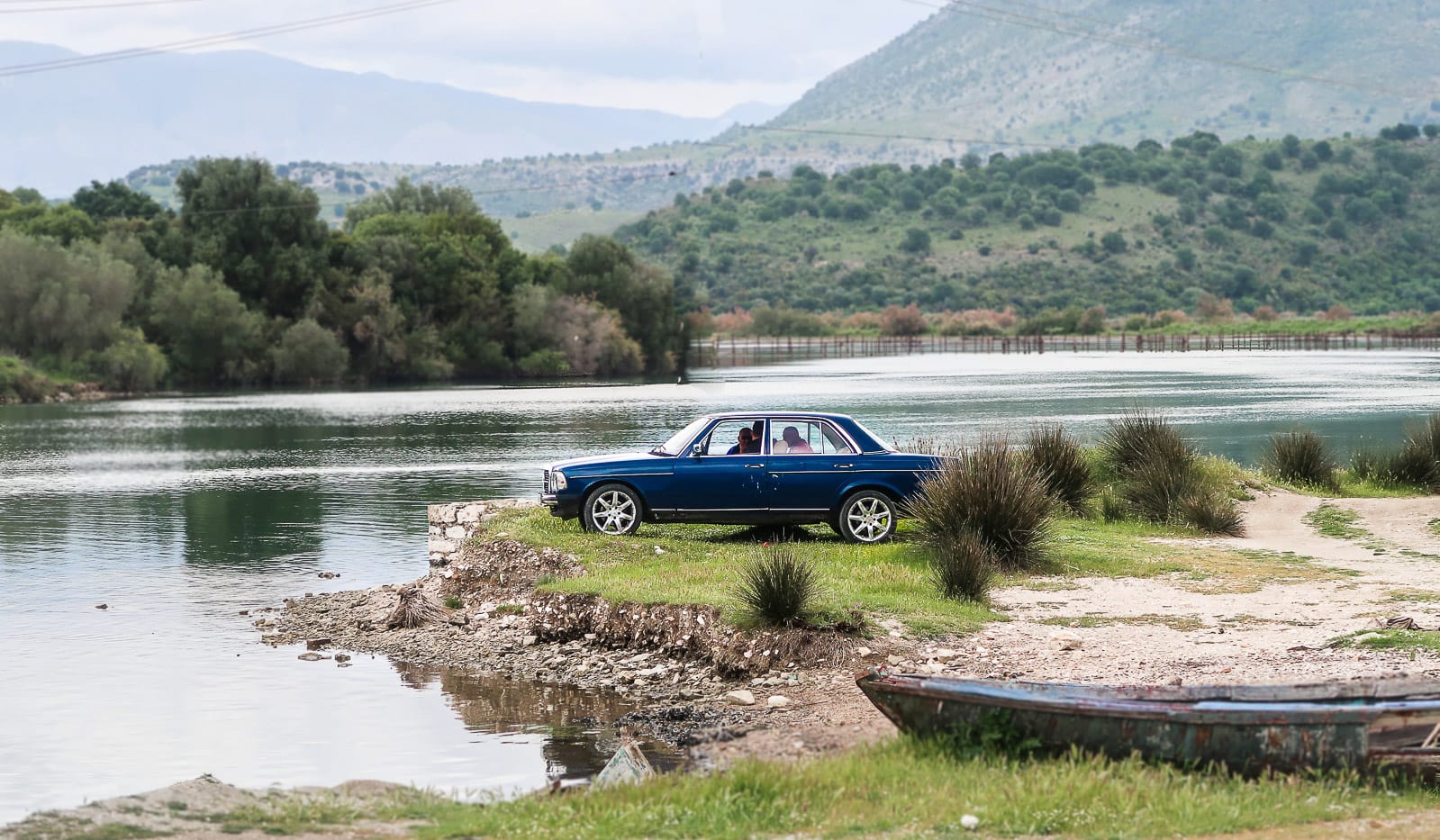 Butrint is famous mainly for the ruins of the settlement, which was founded there in the 7th century BC. Because over the centuries, the place was taken over successively by Greeks, Romans and Turks among others, its architecture shows the remains of many styles and tell a lot about Albanian history. In the entire park, the most interesting places, in my opinion, are the four following ones:

The other places are in quite bad condition so you just walk between some scattered stones. This is why I have to admit that this place didn’t impress me greatly. However, comparing it with other historical places in Albania (castles, fortresses) and considering it’s over 2000 years old it definitely is one of the most interesting historic places in Albania.

When we visited this place in May 2019 the entrance was 700 Lek, which is quite a lot for Albania. However, we went there at the beginning of May during the long weekend and were lucky to saw some money because 1.05. is a holiday and the admission was free. At the entrance, there were brochures with a map and a brief description of the history of Butrint in different languages. Visiting time is about 2 hours. There are toilets available along the way. 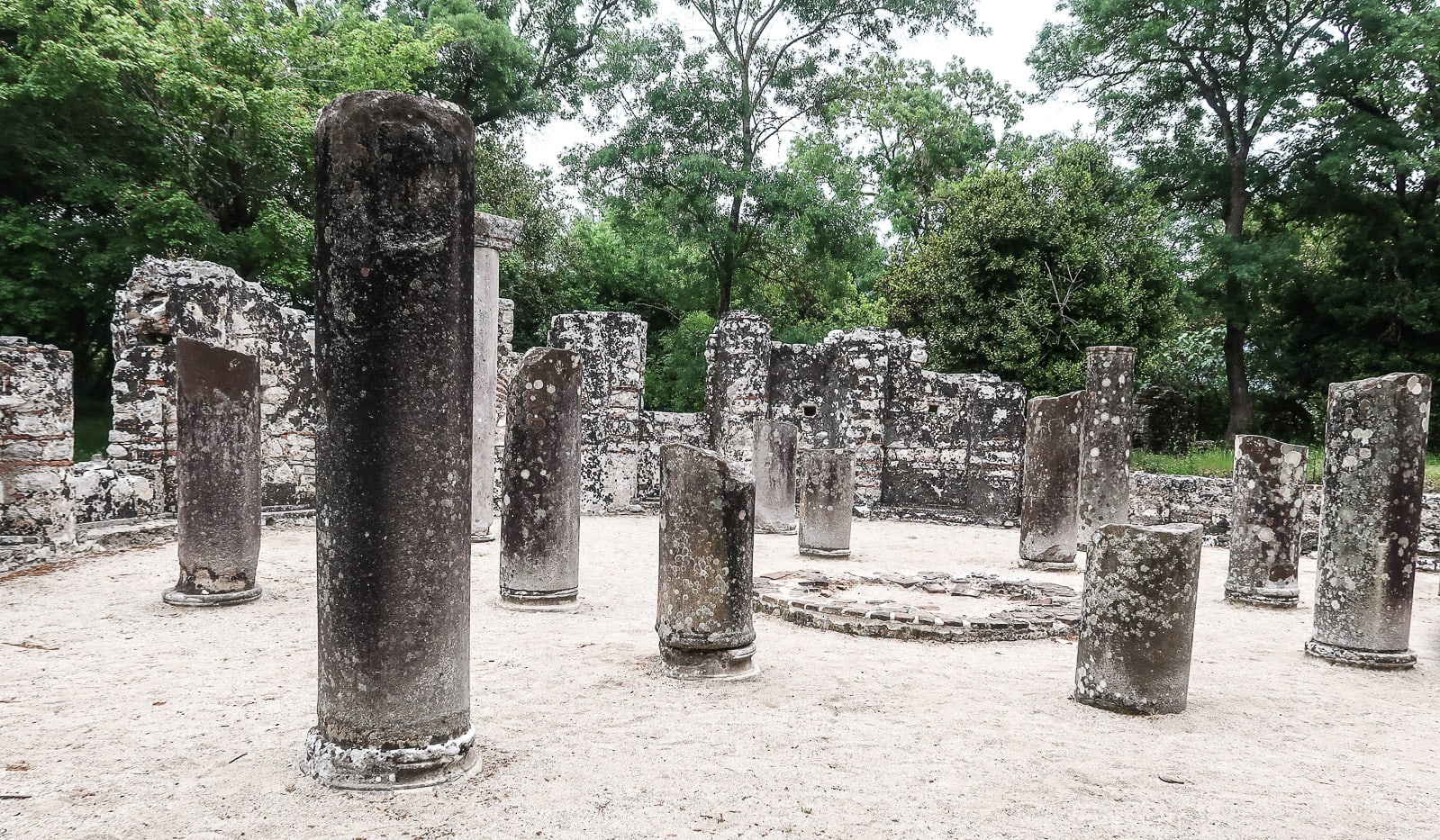 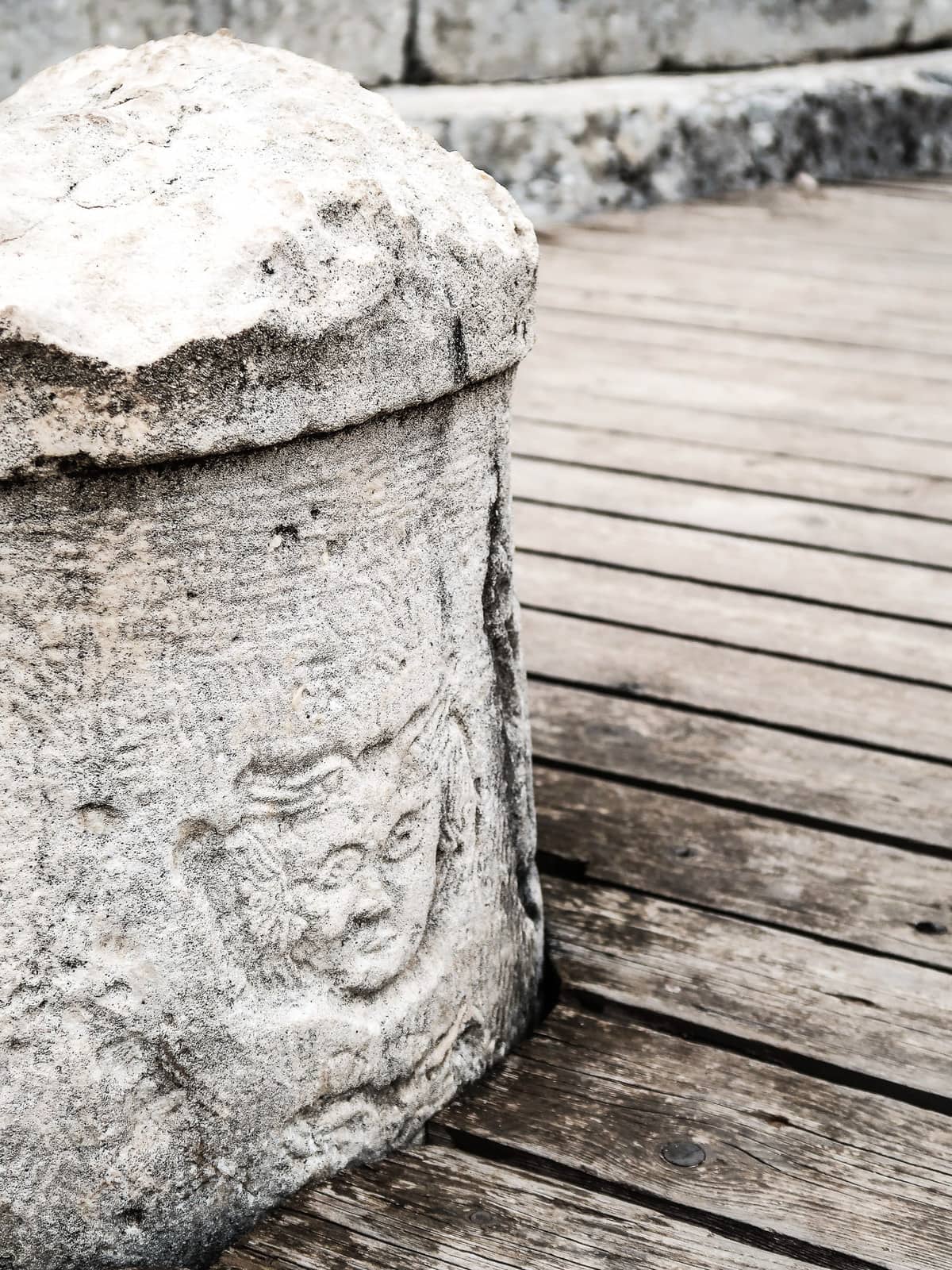 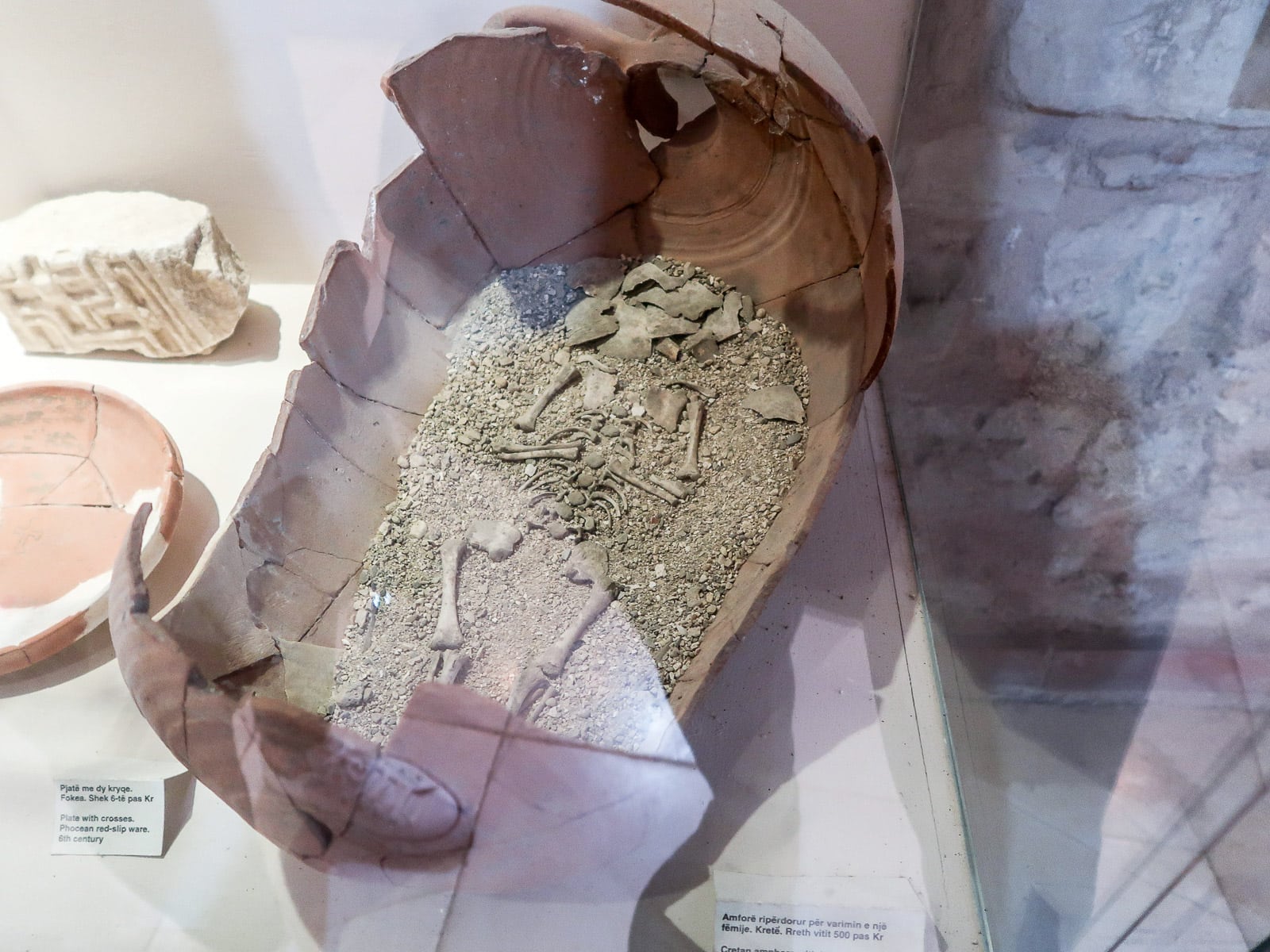 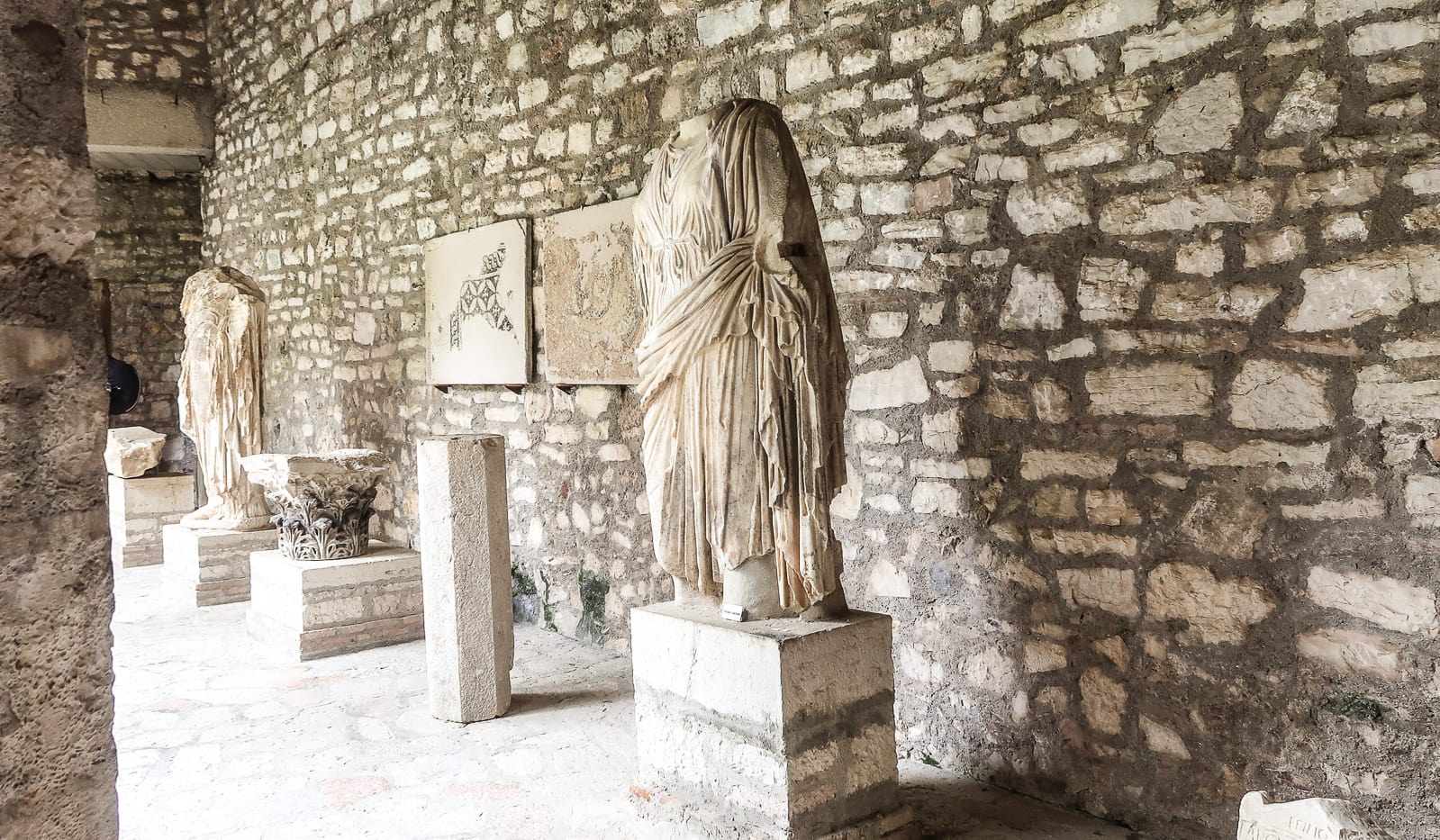 For me, a great attraction was also the ferry taking people and cars to the other, much less touristy, side of the river. The ferry is actually a wooden raft placed on big plastic containers filled with air. The whole construction moves along a metal line pulled by an engine located on one of the river banks. This is one of those places in Albania where the time has stopped and it’s hard to believe that it’s still Europe. Cars, even very large ones (small trucks, campers) can enter the raft. The fare is EUR 0.50/person and it takes around 5 minutes. 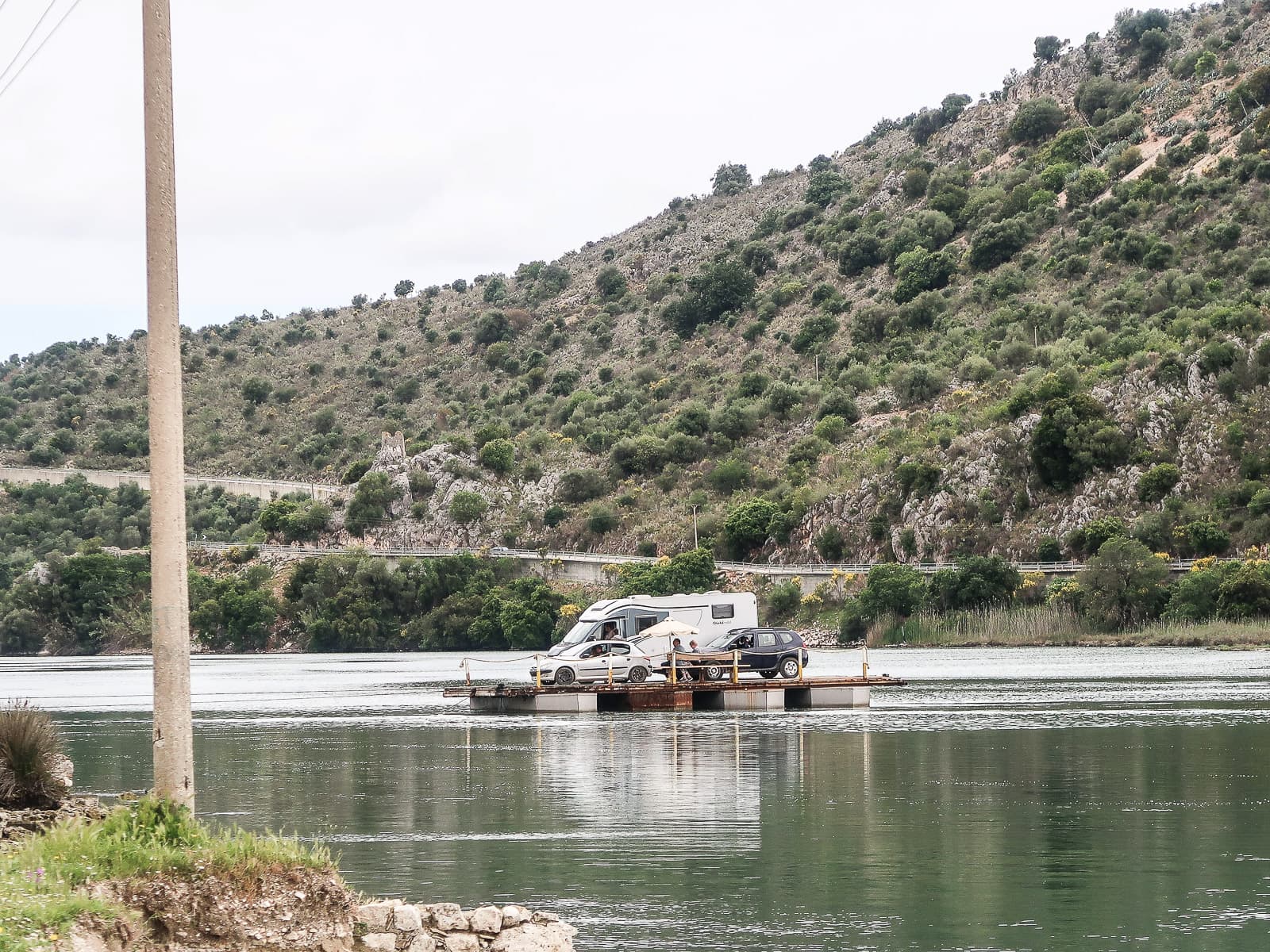 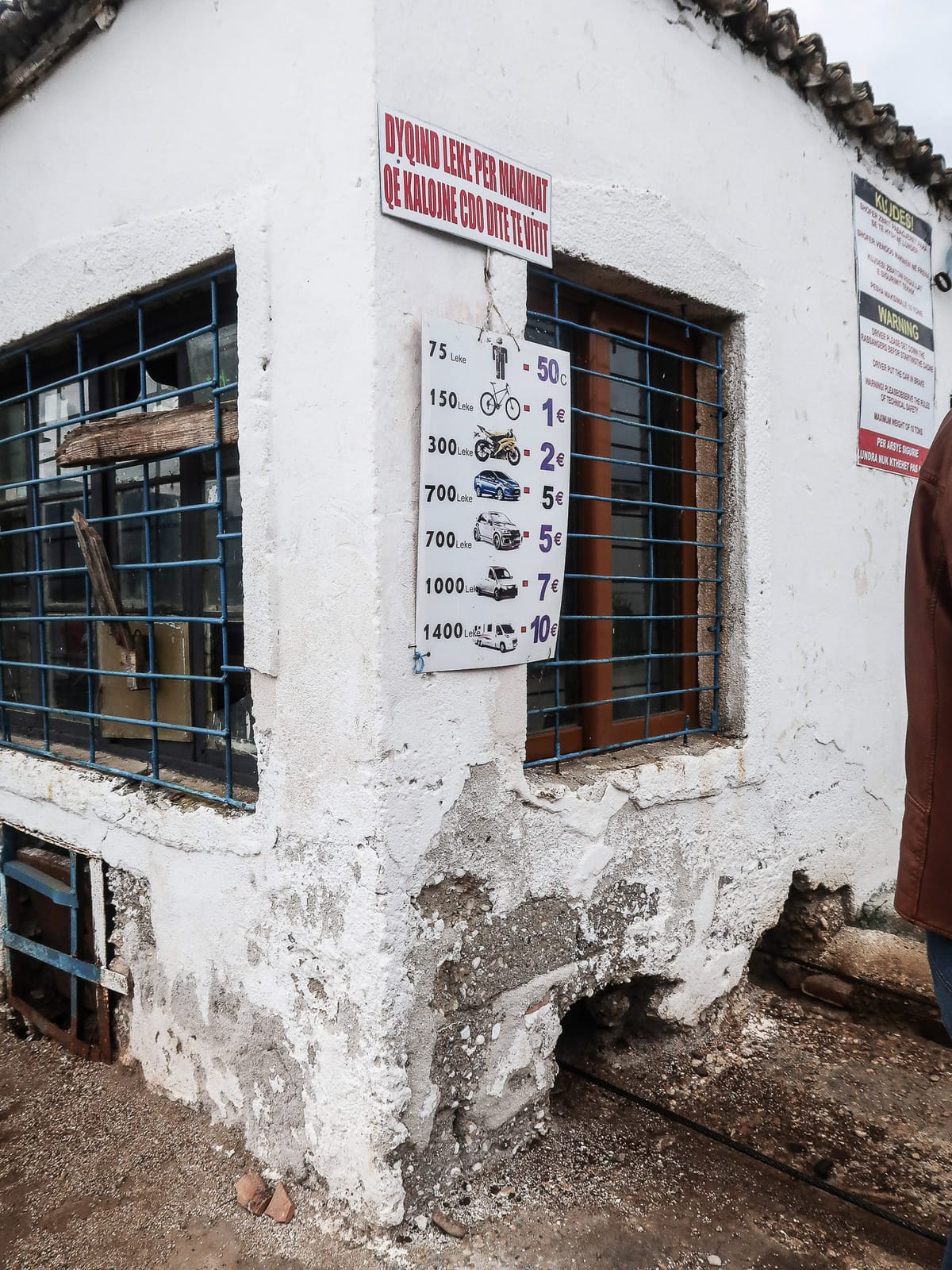 Other side of the river

Only a handful of people reach the other side. It’s completely understandable because there are no typical tourist attractions – except one ruin of a fortress, which was closed to visitors when we were there. However, going for a walk on the other side, away from the crowds, you can watch a little bit the life in an Albanian village. Some typical Albanian views await you here: children playing on the streets, an elderly gentleman sitting on the bank of the river and fishing, cows grazing on the green pasture and dogs running in flocks. They are barking from the distance to make people fear them, but when they come closer they wag happily with their tails asking for you to pet them.

On the horizon, you can also see a tiny white building with a cross located at the top of a hill. It’s hard to oversee it because of its white colour standing out on the green landscape. During our stay in Albania, we travelled everywhere by car, so we rarely had the opportunity to just walk along the street and watch everyday life – here we finally could do that at least for a few minutes. Maybe that’s why this place captivated me so much. 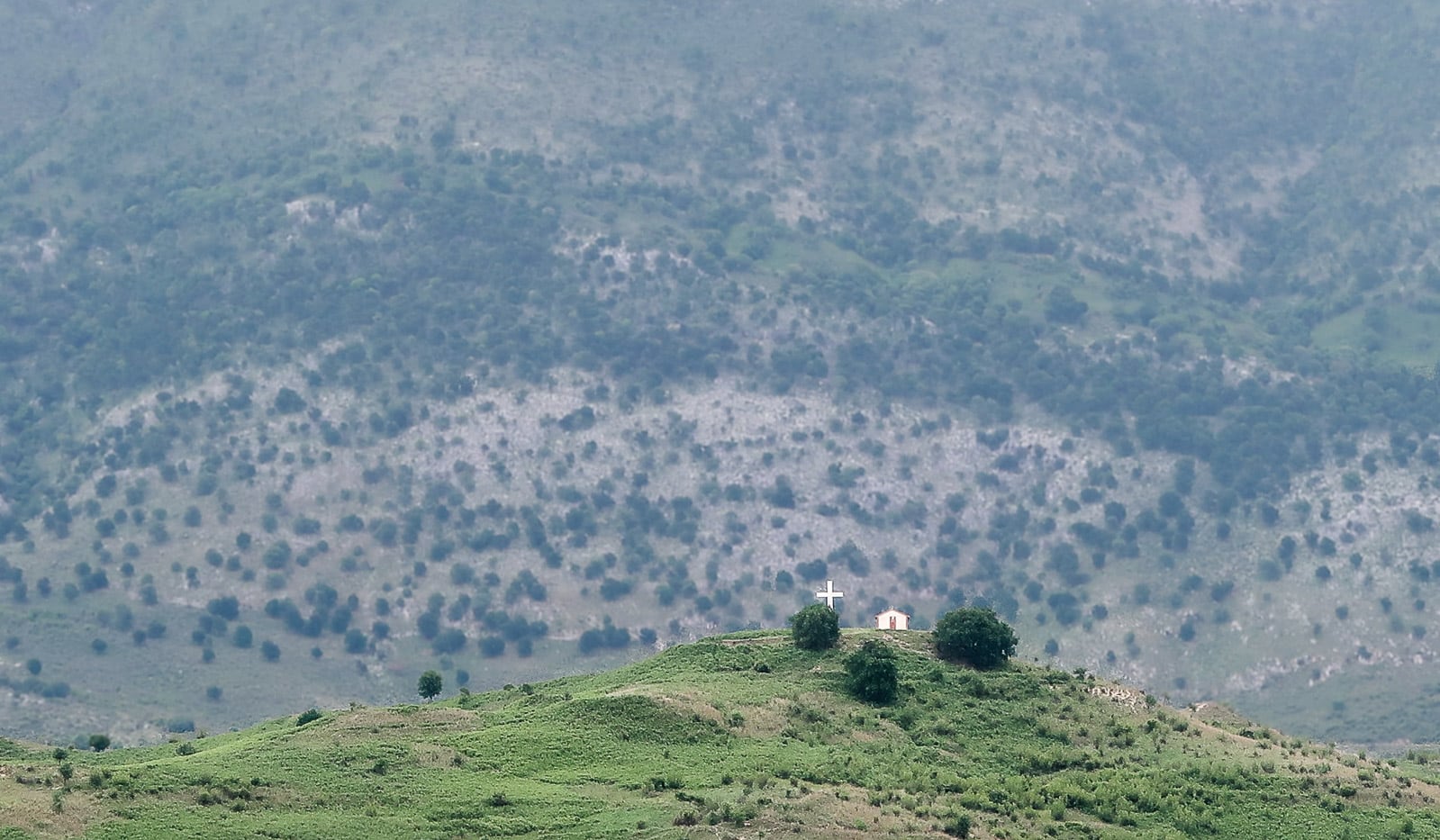 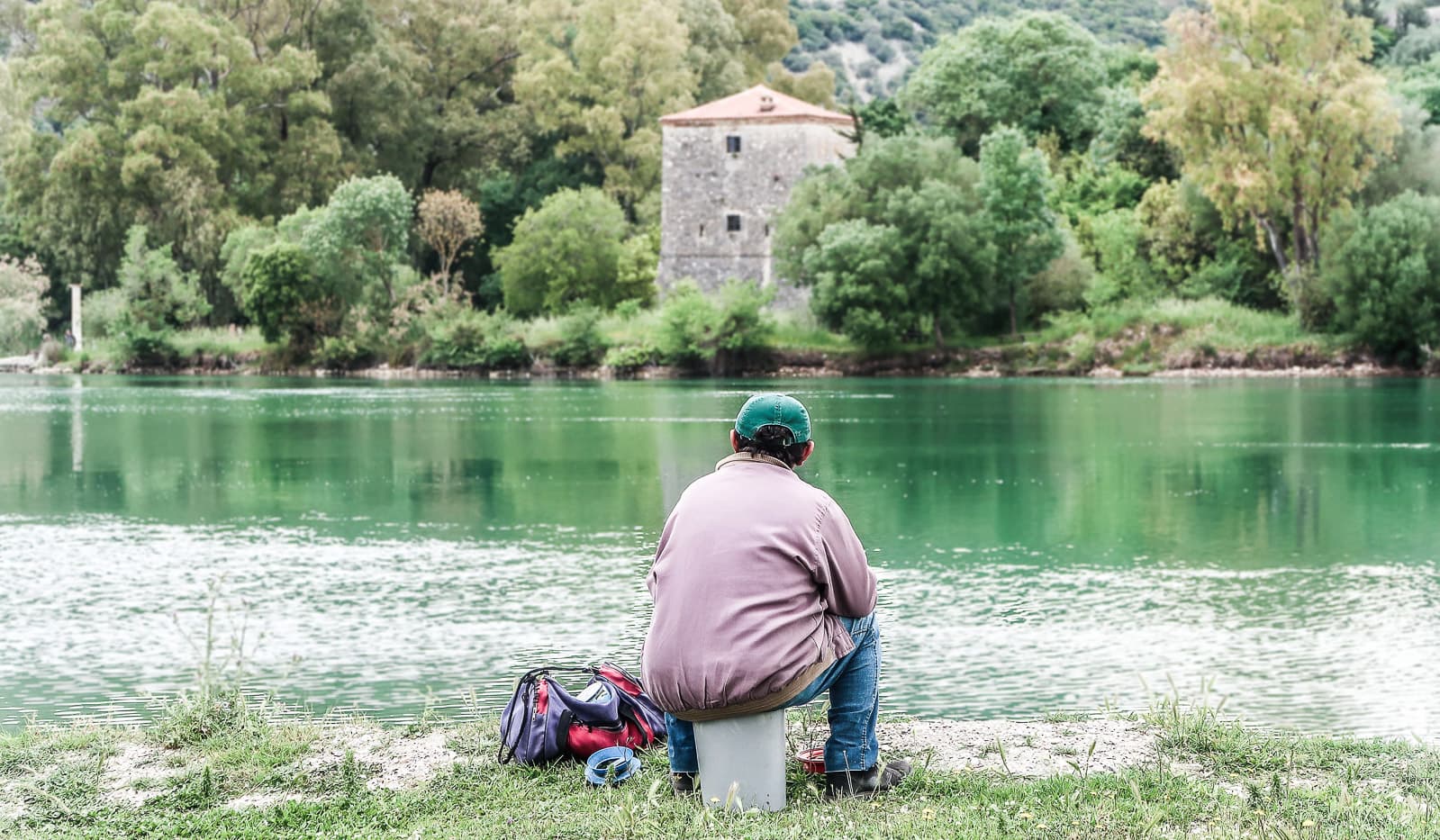 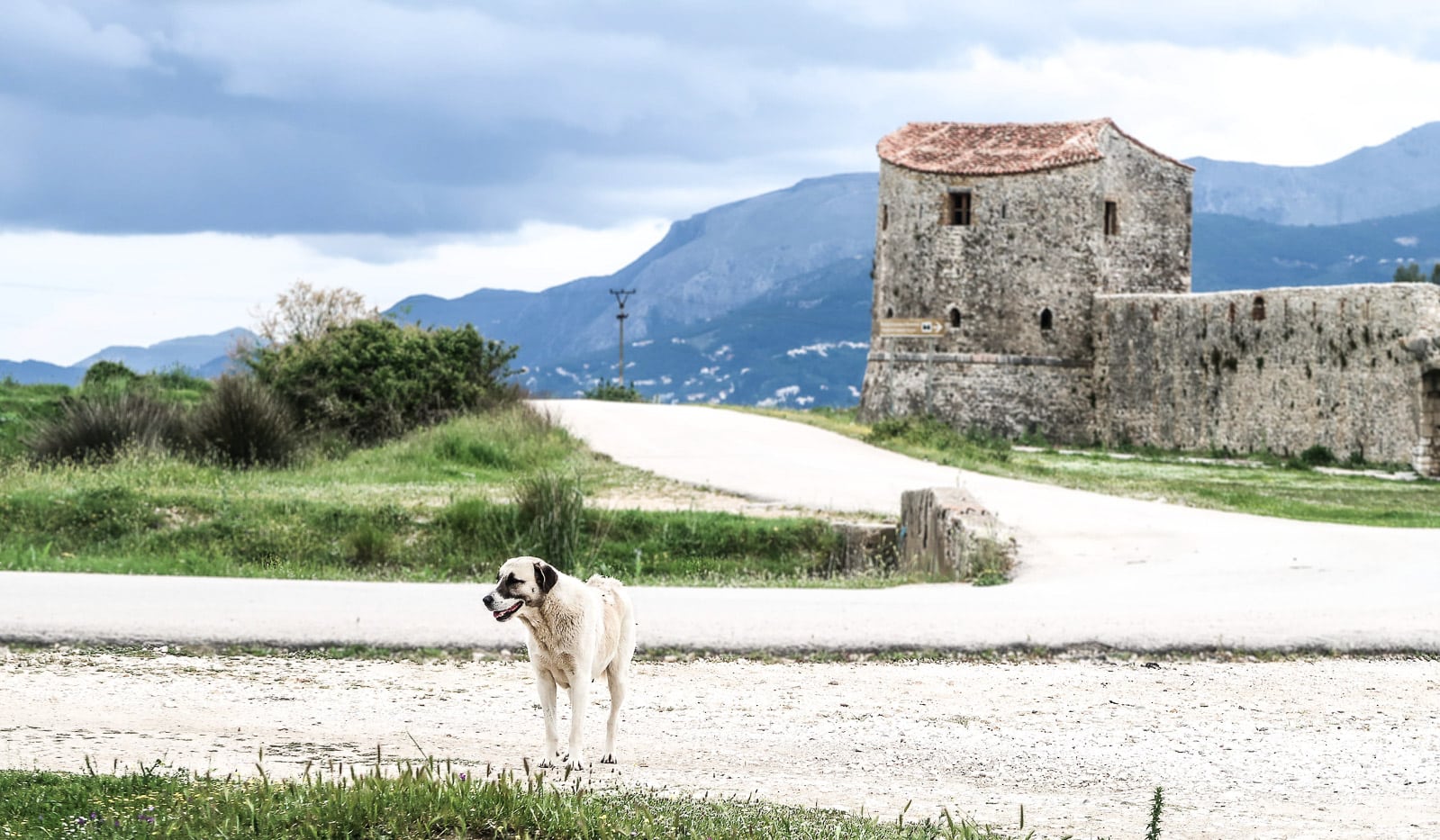 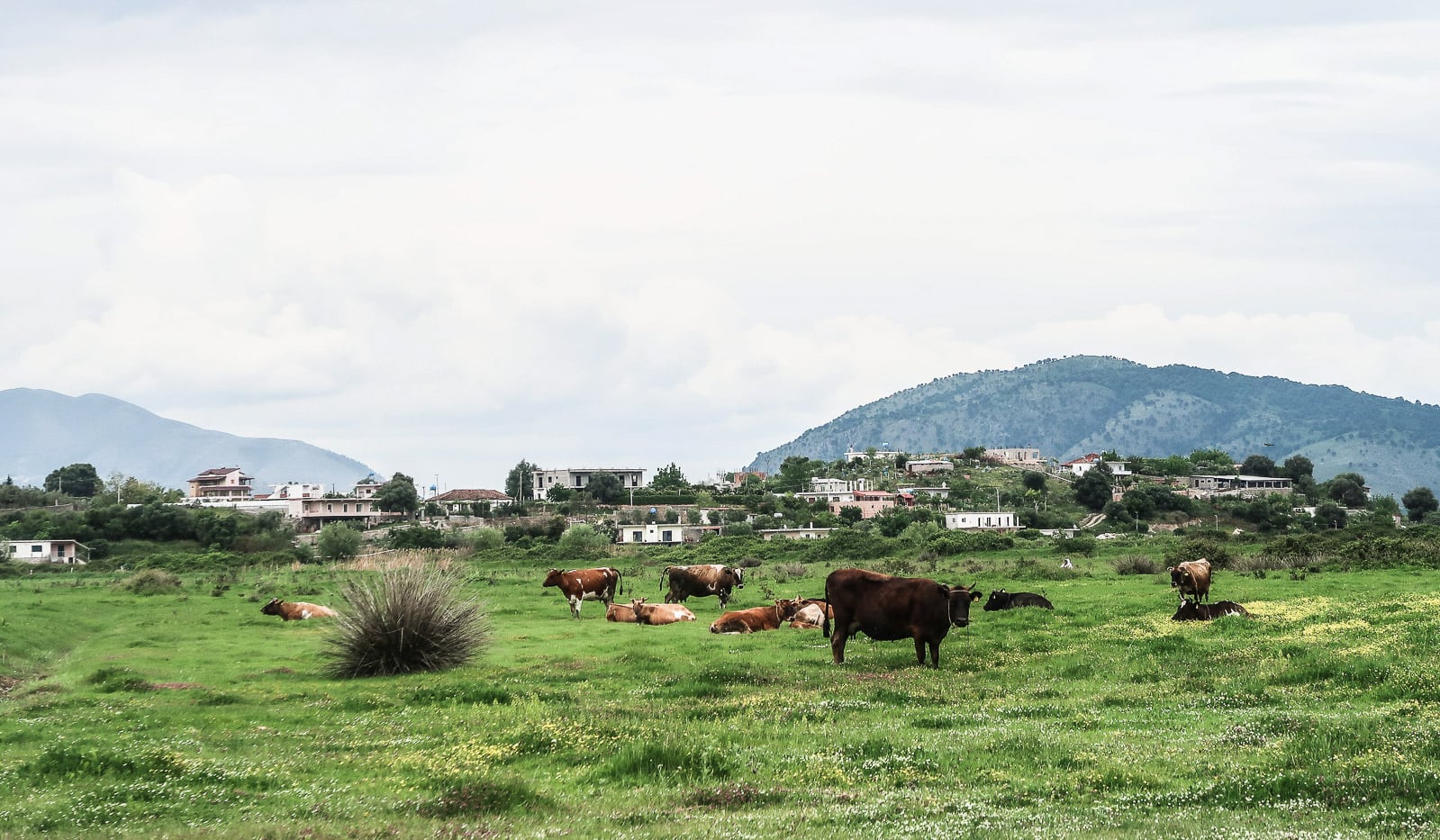 WHERE TO EAT in BUTRINT?

I can’t remember seeing any restaurants in the neighbourhood of Butrint. On Google Maps I only found one: Restorant Hotel Livia. However, I think it’s better to eat lunch or dinner in Ksamil or Saranda. There is a much bigger choice there. In front of the entrance to the National Park, one could buy a small snack. Albanian women were selling strawberries and figs in tiny paper cups. The prices were already prepared in EUR for German tourists. It’s good to bargain a bit if you have the feeling that the price is too high. One woman sold us a cup of strawberries for 1,5 EUR and a few minutes later we bought another cup of the same size from a girl for 0,50 EUR. 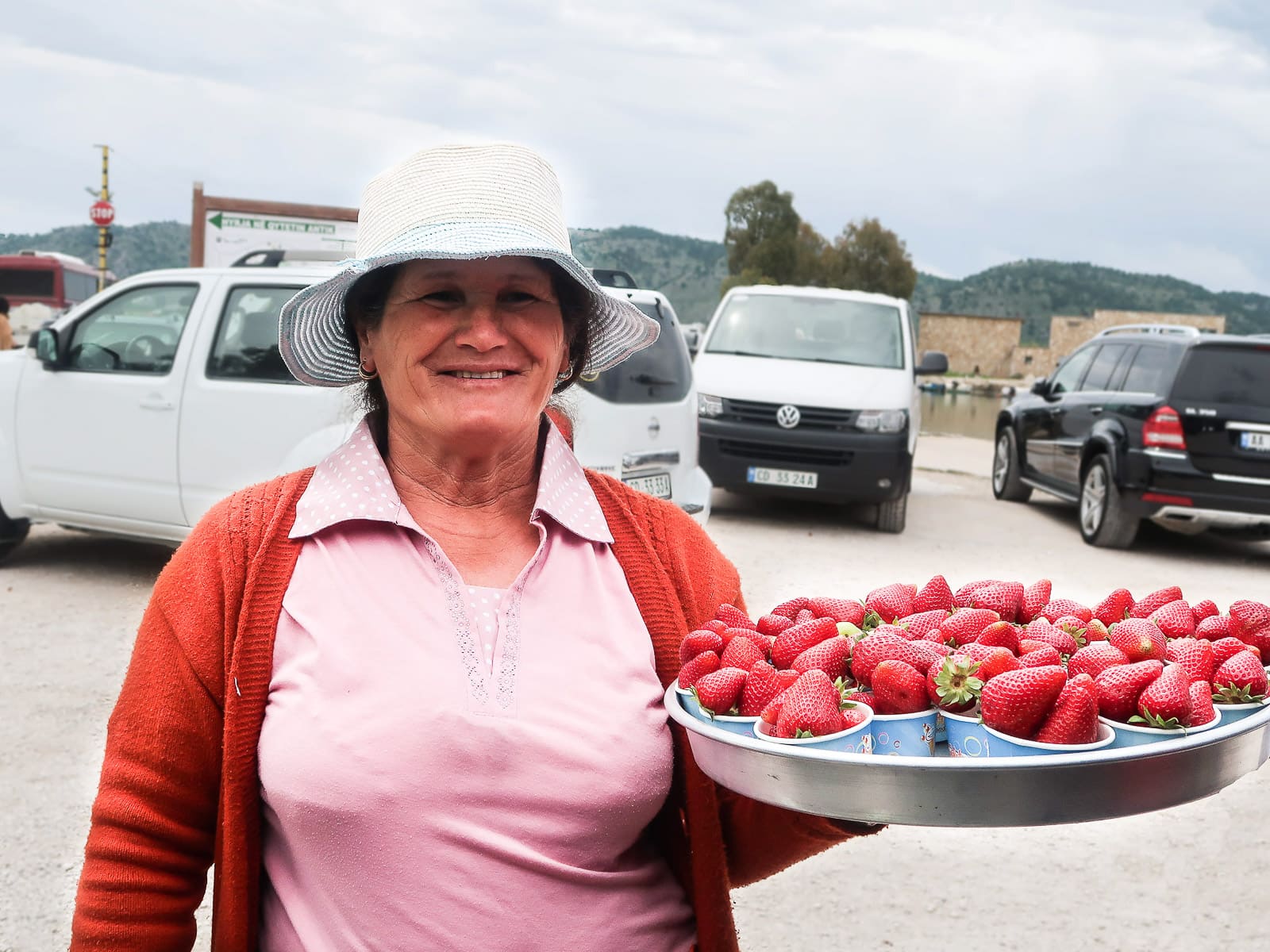 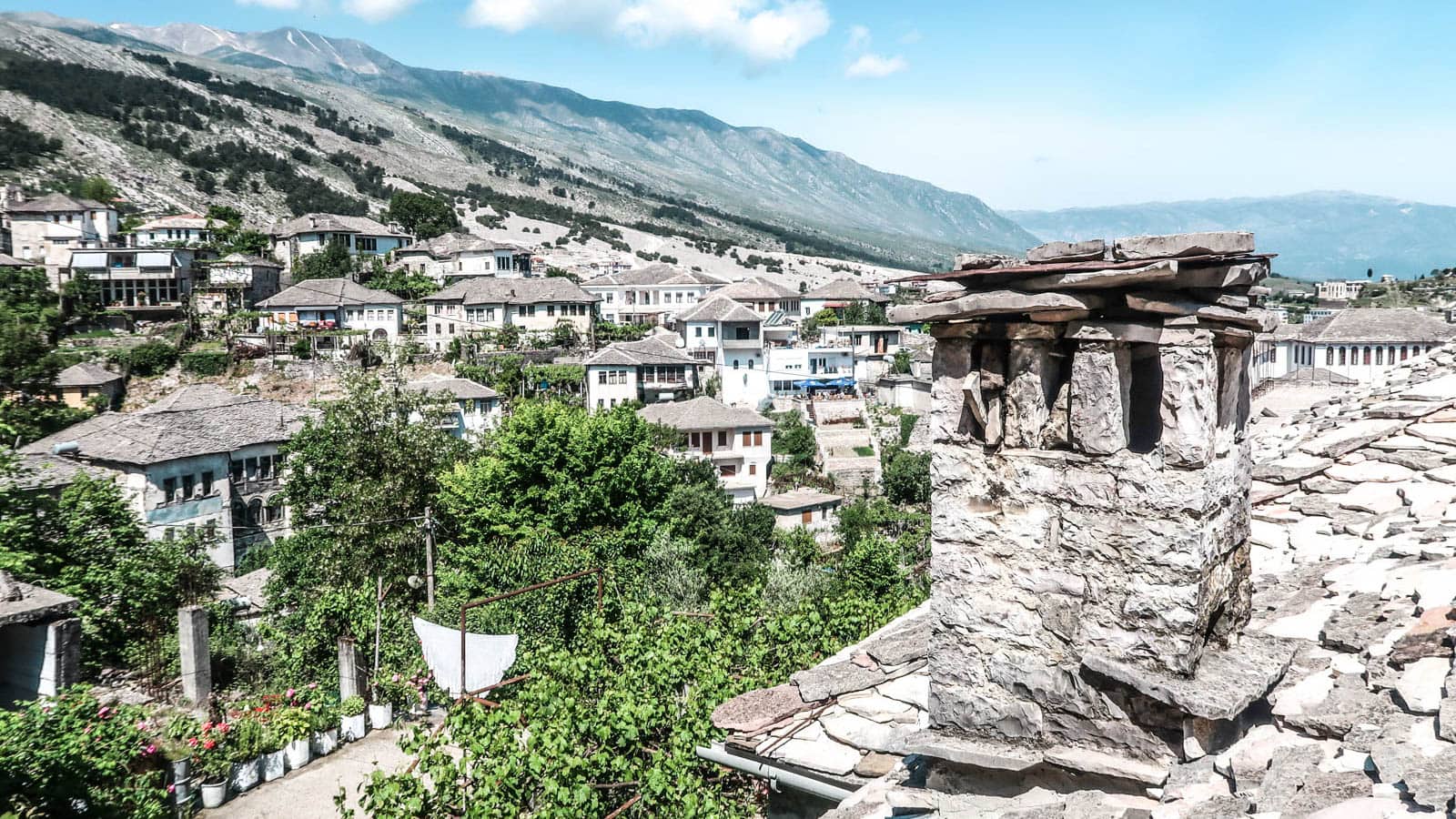 14 best places to visit in Albania

Albania with a tent – best campgrounds and wild camping places 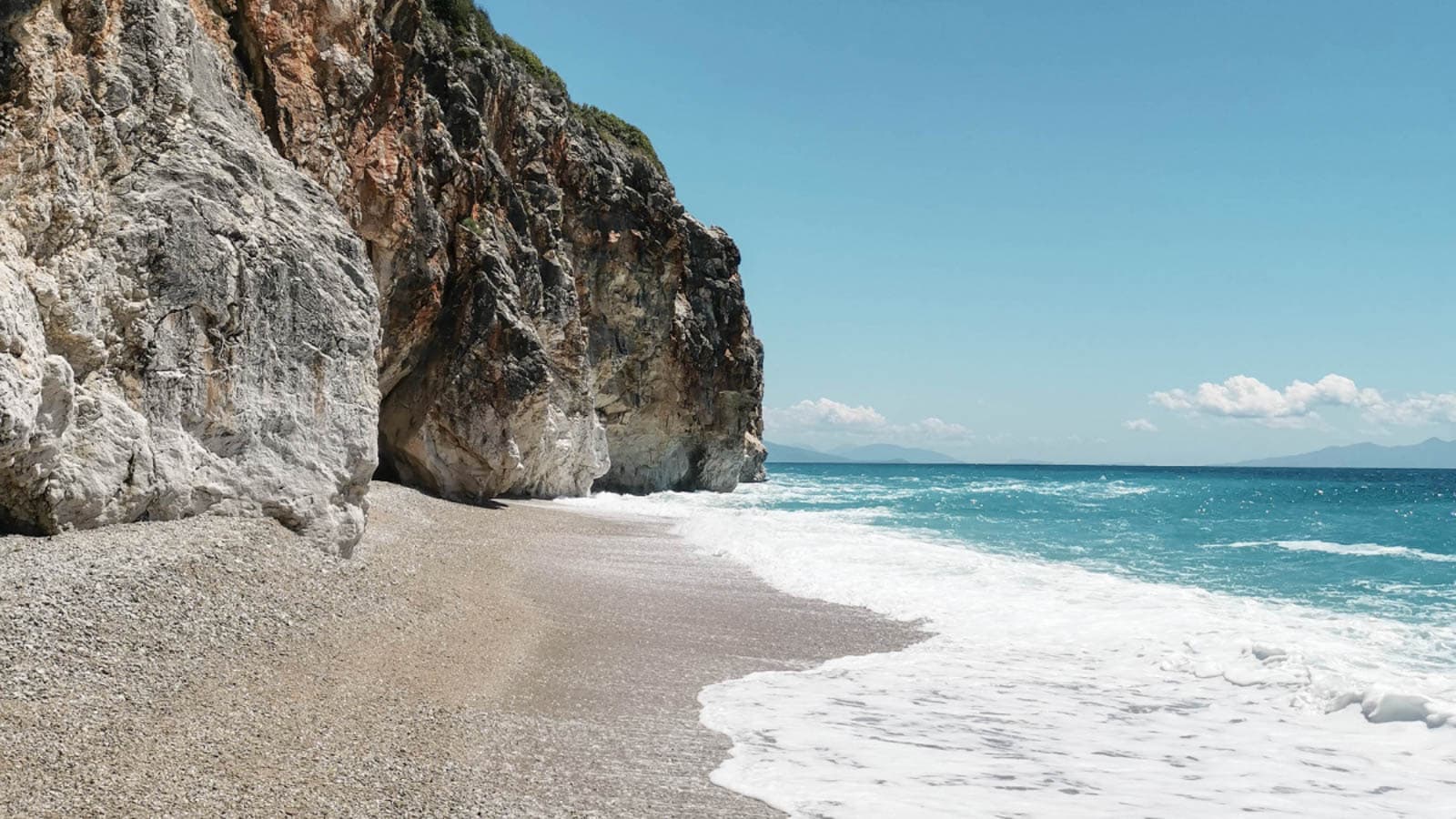 Gjipe Beach – the most beautiful wild beach in Albania 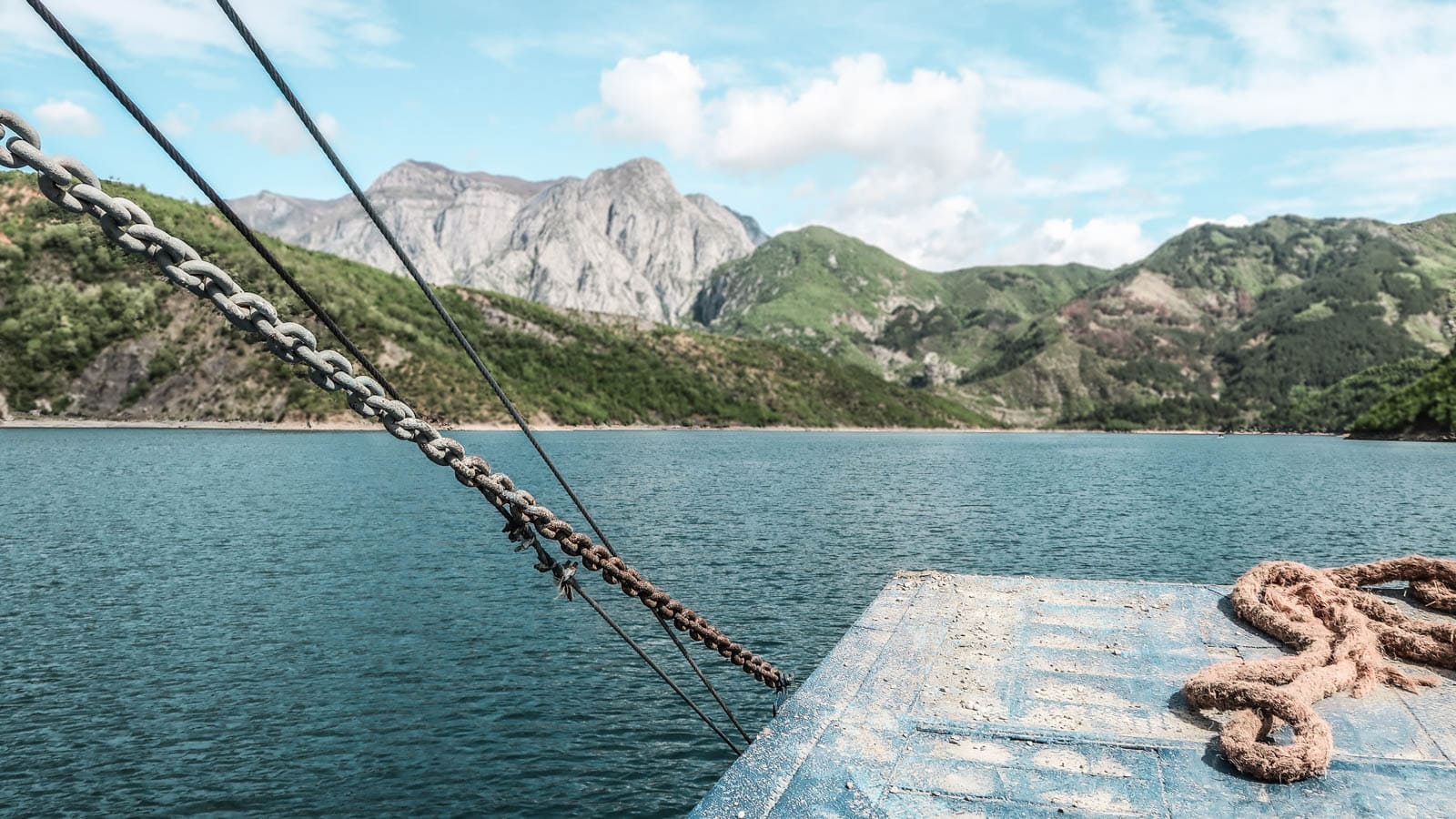 Komani Lake DIY – how to cross it with a car ferry